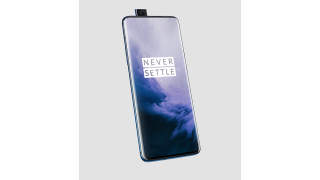 Right on cue, OnePlus has announced its next pair of smartphones, the OnePlus 7 and OnePlus 7 Pro. OnePlus' partnership with EE means the company's first 5G phone, a version of the flagship 7 Pro, is also on the way.

The new OnePlus 7 Pro (and not the rumoured OnePlus 7T) is powered by the top-of-the-line Qualcomm Snapdragon 855, the same chipset inside the Samsung S10+ and the latest handsets from LG and Sony. It also features an octa-core processor that OnePlus says is 45 per cent faster, and consumes 20 per cent less power, than the Snapdragon 845 found in its previous 6T flagship. In fact, the 7 Pro's specs reveal improvements over its predecessor across the board, from battery and screen size to camera and RAM.

Continuing a trend in the Chinese brand's handsets, the new flagship expands screen size again. The OnePlus 7 Pro sports a 6.67in QHD+ (3120 x 1440) Fluid AMOLED display, the largest ever screen in a OnePlus handset.

It supports HDR and HDR10+ video content and OnePlus says it has worked to improve the responsiveness and smoothness of the screen by upping the frame rate to 90Hz.

The 7 Pro introduces a triple camera with a headlining 48MP main lens accompanied by a 16MP Ultra Wide Angle lens and an 8MP Telephoto lens. With 3x optical zoom, 4K recording at 60fps, and an UltraShot engine with HDR+ and Super Resolution modes, it certainly seems determined to compete with the impressive camera tech of rival smartphones (ahem, the Huawei P30 Pro).

In order for the 7 Pro to boast an all-screen front with a 93 per cent body-to-screen ratio, OnePlus has moved the front camera off-screen to a pop-up 16MP camera module, which protrudes out of the top via an elevating mechanism. Ugly? Maybe. But apparently it should be safe from being accidentally snapped off. OnePlus claims the module will automatically retract in a ‘fraction of a second’ when it detects being in free-fall – handy for butterfingers.

The new OnePlus mobile also boasts a 4000mAh battery (up from the 6T’s 3700mAh), with the brilliantly-named Warp Charge 3.0 said to increase charge speed by 38 per cent. Further number revelations include the 256GB storage, as well as a huge uplift in RAM – it's now 12GB, up from the 6T’s 8GB.

One of the headline features of the OnePlus 6T predecessor was the introduction of its in-screen fingerprint unlock, and here it’s reportedly been improved in terms of speed and accuracy thanks to a three-element plastic lens and a larger sensor.

Unsurprisingly, the Pro 7 follows its predecessor’s dismissal of the headphone jack. A USB-C connection does the honours instead, as is becoming standard, while elsewhere there are stereo speakers with Dolby Atmos support - both firsts for OnePlus.

OnePlus' OxygenOS – a light skin, which here sits atop Android 9.0 Pie – is here, as it has been in OnePlus smartphones since 2015.

And, ending on a reliable highlight of the new OnePlus, pricing is attractive: between £649 and £799 depending on RAM (6GB-12GB) and storage (128GB-256GB) options. The OnePlus 7 Pro will be available from May 21st. Pricing and availability for the 5G version is yet to be confirmed.

The OnePlus 7 meanwhile shares many of its sibling’s specs; the Snapdragon 855 mobile platform, Dolby Atmos stereo speakers and in-screen fingerprint scanner. But here there's a 3700mAh battery, 6.41in screen and a 48MP dual camera. It’s available with a maximum 8GB RAM and in a ‘Mirror Gray’ finish.

OnePlus has rounded off an afternoon of announcements by confirming new Bullets Wireless 2 headphones. The successor to the "good value for money" Bullets Wireless, they have supposedly been made more ergonomic – the upshot of 1640 adjustments and tests! – and feature a larger moving coil to augment bass performance.

Alongside Bluetooth 5.0 and aptX HD codec support, the new earbuds are, like the new handsets, compatible with Warp Charge tech. OnePlus say it improves charging speed by up to 100 per cent over the predecessor, with 10 minutes' charge providing 10 hours of playback. A full charge offers 14 hours of playback.

The Bullets Wireless 2 will also be available from May 21st, priced at an enticing £99.

Google announces midrange Pixel 3a and 3aXL with headphone jacks