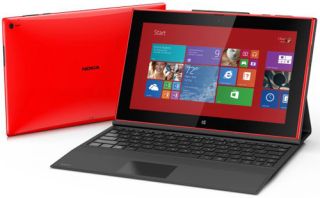 Nokia has launched its first phablets and a tablet at what will be its last Nokia World event before the company is sold to Microsoft next year.

The Lumia 1520 will be the flagship model of the two new super-size "phablet" devices. It will come rocking a huge 6 inch, 1080p display as well as the Qualcomm Snapdragon 800 processor running at 2.26GHz with 2GB RAM.

Windows Phone 8 has never been a slow operating system (OS), but now with the new processor, the Lumia 1520 should absolutely fly.

All that speed will require some decent power, so the Lumia 1520 is fitted with a 3,400mAh battery. The 1520 also carries on with Nokia's wireless charging technology and comes packing 4G LTE connectivity.

With all of this combined, the new flagship Lumia should pack enough punch to take on the best smartphones of 2013.

Nokia has recently introduced its PureView camera technology, which saw the Lumia 1020 sport a beast of a 41MP sensor.

The Lumia 1520 also has the same technology, but only features a mere 20MP instead. Some of the features of the camera could however, tempt budding photographers. Users are able to zoom in on different areas of a photo after taking it without compromising quality – a little like we've seen on the LG G2 – as well as bringing certain aspects into and out of focus.

The Nokia Lumia 1320 is the little brother of the two, but don't disregard it too quickly. The main aspects have been downgraded: 720p display (but still 6 inches), Snapdragon 400 processor at 1.7GHz, 1GB RAM and 5MP camera.

The battery however is the same, as is 4G connectivy. The Lumia 1320 also comes bundled with number of preinstalled apps also found in its flagship counterpart, including Nokia HERE maps.

Both devices follow the current Lumia design trend of a one-piece polycarbonate shell, in a variety of colours. Prices are yet to be announced but expect both the phones to be released in the UK sometime in 2014.

The other star of the show in the Middle East was the unveiling of the Nokia's first Windows tablet: the Lumia 2520.

Other features include a 6.7MP camera with Zeiss optics, and the same camera app that can be found on its Lumia 1520 cousin. Nokia's new Storyteller app is also on board, which plots where your photos were taken, in a similar fashion to Apple's Places feature of iPhoto.

Design cues have been taken from the Lumia range of smartphones, with a uni-body design and an array of colour options.

The firm also wanted to update its budget range of 'Asha' phones as well. This range still uses Nokia's own Series 40 operating system and is primarily aimed at developing countries. The Asha 503, which is the most expensive in the range now features 3G. connectivity.

But will anyone buy a Nokia tablet, not least with Apple's launch of new iPads just hours away? We shall see.