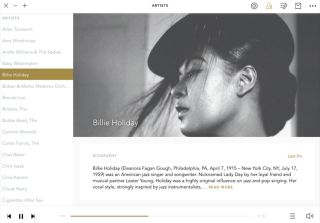 Spotify et al. might be great for us listeners, but musicians are always complaining about their paltry commissions. Now new streaming service Voltra promises to give them 100 per cent of the money their music makes through streams, thanks to its innovative business model.

Instead of charging a monthly fee, or being funded by advertising, Voltra charges you a small amount every time you stream a song. Once you've streamed it 10 times, you'll have paid for it in full and it's yours to stream any time you like.

It's hoped this will appeal to people who want to own the music they listen to.

"There's a pretty significant population of people who collect and own music, and I think that product space was a little bit neglected," Voltra co-founder Paolo Fragomeni told The Verge. "As music lovers, we really wanted to have a product that was totally focussed on music ownership."

Download the desktop or mobile Voltra player - both of which are in beta - and you can choose to either buy a song outright, or use the stream-to-buy option. The latter lets you listen to the song in its entirety once for free, then charges per stream up your 10th listen.

For Fragomeni, a big part of the appeal doing away with 30-second previews. "Thirty-second previews actually suck, because you might totally miss this really awesome guitar solo at 1:10 - it got cut off from the preview, so you never decide you're going to buy that song," he said.

If it's not for them, however, artists and labels can choose to opt out of the stream-to-own option.

There's also a premium tier, which costs $10 per month. You'll still have to pay for songs, but your purchases will automatically be backed up to the cloud.

In order to get 100 per cent of the revenue from music sales and streams, musicians will have to sign up direct with Voltra. If they sign up through a label or distributor, Voltra will take 10 per cent of their earnings. According to Voltra, on average a musician will earn 99 cents after 10 streams through its service, as opposed to 226 streams on Spotify, 134 on Apple Music and 146 on Google Play.

It's certainly a bold business strategy. But considering Tidal launched on the promise of giving artists more financial reward for the fruits of their labours, it's one that could go down very well indeed in the music community.

Voltra hopes to be out of beta and public by May.