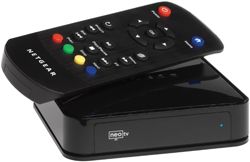 The NeoTV will also come with a Remote app for iPhone and Android allowing you to control the box using your smartphone.

The NeoTV is capable of streaming 1080p HD video wirelessly or over ethernet, while there's also a digital optical output for 5.1 sound.

Content partners have yet to be confirmed for a UK box. Due later this month in the US, the Netgear NeoTV streaming player (NTV200) set to sell for $80.