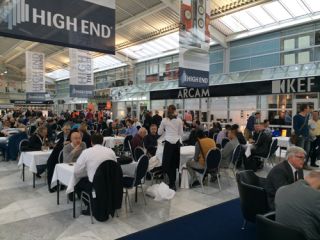 Believe it or not, in all the years I've worked in the hi-fi industry, this is the first time I've ever been to the High End Show in Munich. Legend has it that this is one of the best hi-fi shows in the world, and I was not disappointed. In fact, I was hugely impressed.

Held at Munich's MOC exhibition centre – a bright, airy, modern venue - the show occupies three halls which are packed with the most esoteric, bizarre, wonderful and stylish hi-fi products you'll probably ever see under one roof.

In my all-too-brief two day visit, I saw an entire hi-fi system made out of wood (well apart from the electronics, obviously), a pair of concrete speakers, any number of exotic-looking valve amps and horn speakers, heard Naim's $200,000 Statement amplifier with a pair of Focal Grand Utopia speakers for the first time (I missed the demo at CES), was introduced to the new 'baby' KEF Blades and Reference series, came across a pair of $600,000 speakers, a whole raft of hand-crafted turntables and this extraordinary chap, called Angelo apparently.

Angelo is described by the company that makes it as 'an unconventional speaker' - you don't say! And just to prove it's a working model, take a look inside:

High End is exactly what a hi-fi show should be like: the rooms are big and airy (no cramming 20 people into a tiny hotel bedroom), visitors can easily wander around and some of the exhibits and stands wouldn't look out of place in an expensive shop in Knightsbridge or Mayfair. If you ever get the chance to go (the show is open to the public from Friday to Sunday), I can't recommend it enough.

In the meantime, here's a selection of pictures I took while wondering round the show. I hope you enjoy them.

The original KEF Blade next to the revised Muon:

The new KEF Reference Model Five (£10,500) with the Model Ones in the background:

And the simply enormous KEF Reference One Centre speaker! Definitely a two-person lift that one, and you'll need the sturdy stand.

Arcam shared a room with KEF and its new C49 preamp and P49 power amps (middle and bottom shelves) were used to drive the KEF Reference Fives:

And if you look closely you can spot the first working protoype of Arcam's forthcoming UDP411 universal Blu-ray/SACD player:

Fancy some stereo speakers lovingly crafted out of wood? Here you go:

If you want an entire wooden hi-fi system to match, you can have that too. I particularly enjoyed the poster on the wall:

At the other end of the spectrum, you could even get speakers with entirely concrete cabinets. Yes, really. I assume cabinet vibrations won't be a problem with these:

Elsewhere, there were horn speakers aplenty, including these gorgeous-looking ones from Avantgarde:

For a different take on the concept, how about these? So far reaction on our Facebook page has been mixed, but I must admit rather like them in a weird kind of way:

Of course, not everything shown at Munich has to be off-the-wall, there's plenty more affordable and mainstream hi-fi too. Such as the new Heed Audio Thesis amplifier range. You can read all about it in our news story:

Roksan caught us by surprise with its new K3 range of hi-fi separates, including a CD player, stereo amp and DAC, all in smart new casework. A streamer is on the cards too.

And for a different take on the company's traditional hi-fi components, here's the flagship Roksan Oxygene amplifier in an eye-grabbing orange finish:

And Cambridge Audio had plenty to celebrate with its new Aeromax speakers, One all-in-one music system, two new home cinema receivers and a revised version of its Award-winning StreamMagic 6 streamer. All the details are in our news story.

Over at Astell & Kern's stand, there was much interest in its deal with Qobuz, the French music streaming service, and the new AK100II and AK120II high-res portable music players:

While on the Jarre stand this colourful display of new Bluetooth wireless speakers (as well as some colourful skulls) caught my eye:

And there's nothing like a bit of Ambiition, as the name of this new Danish speaker highlights. It's taken five years to develop and will go on sale in 2015:

Talking of ambition, there was much chatter about the recent financial restructuring of the Focal-Naim alliance and the company's renaming. Both parties remained extremely bullish and upbeat at their joint press conference, and just to prove the point that the essential nature of the two companies and their products won't change, here's a slide from their presentation which neatly makes the point:

There was one slightly tricky moment during the demo of the Naim Statement when the power blew out, but swift action behind the scenes soon had the system up and running again. Also on display were the Focal Dimension soundbase and the latest addition to the Spirit range of Focal headphones, the Spirit One S:

Two of the most impressive stands I saw were those from high-end brands McIntosh and Devialet. McIntosh went for an all-American Hollywood theme while Devialet was the pinnacle of style and sophistication:

Not everyone could afford to lavish so much money on their displays, but even those with smaller budgets put on a good show. Pro-Ject made particularly good use of its multi-coloured turntables:

And so did Dr Feickhert with some intriguing looking turntables:

Elsewhere, I came across floorstanding speakers clad in red leather, plenty of valve amps and some old-school Tannoy GR speakers:

Of course no serious audio show would be complete without some motoring exotica, and Burmester (Porsche), Revox (Lamborghini) and Meridian (Jaguar) duly obliged:

And finally, if you're in the market for a highly sophisticated piece of kit to clean your treasured vinyl, check out this Hannl record cleaner:

There's something for everyone at Munich High End, and hopefully this has given you a taste of what a great show it is. I'll be back next year.

To find out more about all the new products unveiled at Munich High End 2014, head on over to our news channel.