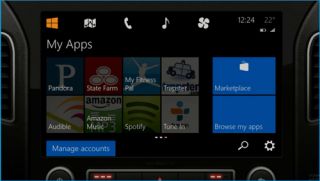 Microsoft has become the latest technology company to announce its own in-car 'infotainment' (information and entertainment content focused) system, aptly titled 'Windows in the car'.

Windows in the car will use Mirrorlink technology to allow users to replicate what's on their smartphone screen directly to a touch-enabled screen in the car's centre console.

Volkswagen, Citroen, Honda and Toyota are the car manufacturers who have already shown their support for Mirrorlink. Aftermarket manufacturers Pioneer and Alpine are also giving their backing to the technology.

Microsoft is the latest tech firm to unveil an in-car system, with Google announcing at the start of the year that it was aiming to bring Android into the car. And just last month, Apple announced its CarPlay in-car service.

No official release date has been given for Windows in the car, however, and nor have any car manufacturers expressed an interest in using the new Windows service – only the Mirrorlink technology at this stage.