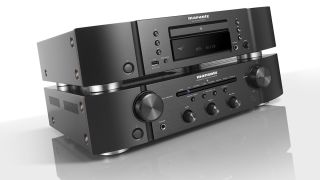 Big news in the hi-fi world: Marantz has introduced its next generation entry-level CD player and amplifier. The all-new 6007 Series replaces the successful 6006 Series, with its PM6007 stereo amplifier and CD6007 CD player succeeding the 2019 What Hi-Fi? Award-winning PM6006 UK Edition and CD6006 UK Edition respectively.

While the two new arrivals mirror their predecessor's aesthetic – cover up the model numbers on their facades and you wouldn't be able to pick between them – Marantz's engineers have, thankfully, made some notable improvements under the hood to justify their arrival.

The 45-watt-per-channel PM6007 (£499) has a new DAC – out goes the Cirrus Logic CS4398, in comes the AKM AK4490. And that's complemented by two selectable digital filters, which have until now only been implemented in the company's more premium products, such as the SA-10 and SAKI Ruby. There's now a subwoofer output, too, expanding on the 6006 UK Edition's generous RCA (five), optical (two) and coaxial (one) input connectivity.

The new power amplifier circuit design promises 'virtually no memory distortion', while the MM phono stage circuit is more advanced, supposedly with a higher signal-to-noise ratio – similar to the design found in the PM7000N streaming system.

The CD6007 also ushers in the same new DAC as its sibling (complete with the two digital filters), with support now all the way up to PCM 24-bit/192kHz and inclusive of DSD 5.6MHz through its USB-A input.

As well as implementing more enhanced components (among which are 120 per cent larger capacitors for improved stability and reduced noise), Marantz has made improvements to the power supply to further reduce noise over the CD6006. Its HDAM (Hyper Dynamic Amplifier Modules) have also been upgraded, and the use of independent voltage regulators for left and right output stages aims to deliver improved channel separation.

Also to reduce interference and, thus, distortion, the headphone amplifier circuit now shuts down when there are no headphones connected.

The Marantz PM6007 and CD6007 cost £499 and £399 respectively and will be available from 7th September in the usual black and silver-gold finishes. Will they assume the mantle of the Award-winning status? We shall let you know very soon...