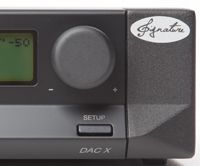 Cyrus has announced the first models in its new Signature Series range: a DAC, DAC/preamp and two mono bloc power amps, all fine-tuned by the company's Technical Director, Peter Bartlett.

Drawing on the work done to create the limited-edition Anniversary Series, designed to mark the company's 30th birthday, the Signature Series models form the basis of Cyrus's new flagship range.

The initial line-up comprises the £1750 DAC X Signature, the £2750 DAC XP Signature DAC/preamp and the Mono X 200 and 300 Signature power amps, at £1950 and £2750 respectively, and more models are expected to join the Signature Series later.

The DAC X Signature uses twin 32-bit stereo converters in dual-mono configuration, and are isolated from the control systems to improve clarity. A custom-designed ultra-low-noise toroidal transformer is used, along with multiple levels of regulation to give each section of the unit a noise-free power supply.

The two power amps feature upgrades including a new input buffer op-amp, with a higher slew-rate and higher gain bandwidth, for a smoother high-frequency response, plus extra power filtering to reduce electromagnetic interference.

These improvements, plus the zero-feedback design of the amps, give what Cyrus describes as 'open imaging with inky-black backgrounds'.