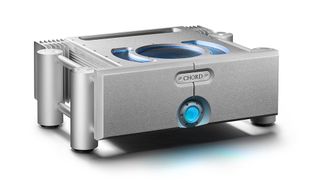 A little over a year ago Chord Electronics announced its most accomplished amplifier technology yet, Ultima. It launched in a mono design but is, from today, available in a stereo configuration, with the introduction of the 300-watt Ultima 5 (£9250) and 180-watt Ultima 6 (£5995) stereo amps.

The Ultima 5 and 6 amps naturally take the place of their predecessors in Chord's amplifier line-up, the SPM 1200 MK II and SPM 1050 MK II, and they continue the roll out of Chord's latest flagship amplifier technology. This lies at the heart of the aforementioned Ultima mono power amp, as well as the more affordable Ultima 2 and Ultima 3 monoblock power amps that launched last summer.

The fourth and fifth members of the range take the Ultima technology into the stereo domain. For the uninitiated, Ultima is based on a technical paper by Dr Malcolm J Hawksford (emeritus professor at Essex University), which was later refined by Bob Cordell of Bell Labs, and has then been developed and advanced by Chord Electronics’ owner and chief designer John Franks.

It's essentially Franks' take on Cordell’s advanced dual-feed-forward error-correction topology, and is, says Chord, "one of the most advanced amplifier technologies in the world".

The amplifiers' custom-designed MOSFET transistors – 32 in the Ultima 6, 64 in the Ultima 5 – are continuously monitored with output stage error-correction circuitry and feature fully balanced input circuitry with DC-tracking servos and temperature compensation. And the drive circuitry itself features an ultra-low-distortion amplifier operating at 300 volts per microsecond.

The new power amps arrive with both balanced and unbalanced connections, speaker terminals, a 12 V trigger and a C-19-type IEC, and, like their siblings, they are housed in aircraft-grade solid aluminium casework complemented by a 28-mm thick front panel and the trademark illuminating spherical power button.

The amplifiers will make their world debut at The Bristol Hi-Fi Show later this month.