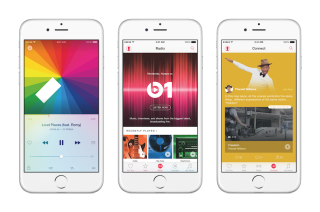 Apple’s music streaming service is growing at a similar rate to its main rival, Spotify, after it added two million users in two months. Apple CEO Tim Cook said of the news: “We feel really great about the early success of Apple’s first subscription business, and our music revenue has now hit an inflection point after many quarters of decline.”

Similarly, some of Apple’s success can be credited to its exclusive content from the likes of Coldplay, The 1975, Gwen Stefani and Drake, who will release his fourth studio album on the service this coming Friday.

It’s not all good news at Cupertino though, as Apple recorded a drop in revenue for the first time since 2003, partly down to a decline in iPhone sales. While revenue for the three months ending March 2016 was still an impressive-looking £34.7bn, that represents a 13 per cent dip, and iPhone sales this year stand at 51 million - in the same period a year ago they were 61 million.

While Apple expects to post a fall in sales for the next quarter, Tim Cook says a record number of people are moving from Android phones to iPhones, so he expects sales to pick up again in the future.

Speaking of the Apple Watch and recently released iPhone SE, Cook said Watch sales had “met expectations and sold more than the iPhone had in its first 12 months”, while orders of the iPhone SE are supposedly creating a backlog due to high demand.