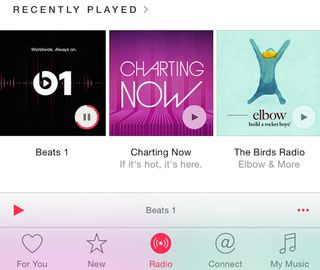 Eddy Cue, Apple's SVP Internet Software & Services, confirmed the news, saying on John Gruber’s The Talk Show podcast: “I live in a world where all of my music is in the cloud, and we’re going to see more and more customers [think the same]”.

“We just passed 11 million Apple Music subscribers, and all of those people live in a world where music is in the cloud.” Rival service Spotify took six years to reach the same figure (although in 2015 it reached 20 million paying subscribers).

One reason for Apple’s growth could be the recent expansion into more territories, bringing its total to 113. Music is available in 59 countries in which Spotify is not, including Russia, China, India and Japan.

Cue also highlighted one of Music’s strengths, which is to allow users to upload their own music to a cloud locker, which can then be accessed from multiple devices. “This is about all of your music, no matter how you acquired it. If it doesn’t exist in the subscription service, if you bought it yourself or it’s available as a bootleg - all of the things you consider [as] music].”

Other reasons for the increase in subscriber numbers could be that Apple Music is the first native Apple app to make the transition to Android and curated radio stations are only available to paying subscribers.