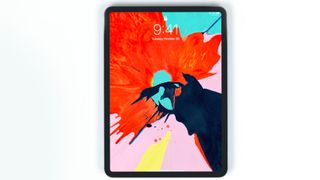 According to Apple, the new iPad Pro, which was revealed alongside a new MacBook Air and Mac mini, sees the biggest change to the line-up since the original iPad Pro.

Apple has brought the two screen sizes of iPad Pro closer together, with a new-look 12.9in model accompanied by a 11in version (up from 10.5in).

The latter manages to be the same physical size as the original 10.5in iPad Pro, while the 12.9in looks to be a fair bit smaller than its predecessor, with 25 per cent less volume. Both have slimmed down to a 5.9mm thickness.

"Performance and productivity combine in the best tablet money can buy" is what we said of the iPad Pro 10.5in model launched last year. And with one-upping specs, as you’d expect for a successor, the new version looks to be even more of a productivity powerhouse and creative whizz.

For one, it’s faster. Much faster, if the numbers are anything to go by.

Apple claims the new A12X Bionic chip delivers a single core and multi-core performance that is 35 per cent and 95 per cent faster than its predecessor, respectively.

As suspected, the new iPad introduces a USB-C charging port to the iOS family for the first time - leaving the iPad 9.7, iPad Mini 4 and iPhones to use Apple's Lightning connection. That ensures the iPad shares connectivity with Apple's most recent laptops and other monitors and accessories. The icing on the cake: with charging out compatibility, you can charge your iPhone from the new iPad Pros too...

The Home button and fingerprint scanner have been removed in favour of Face ID for unlocking the screen. As with iPhone X, accessing controls and sliders can be opened by swiping from different corners and edges of the screen.

Intriguingly, Apple’s built-in four-speaker system (which we’ve lauded the best in a tablet) is now smaller but supposedly goes louder and wider thanks to a new woofer/tweeter configuration.

The camera still has a 12MP sensor and can record 4K at 60fps, but Apple has improved the True Tone flash.

We also have an updated Apple Pencil (£119) that magnetically attaches to the top of the Pro, where it can pair and charge both wirelessly and automatically. Thanks to a new sensor, users can now tap the pencil twice to switch modes - for example, between the current tool and eraser when using the Notes app.

The new Apple iPad Pros are available to buy now and go on sale 7th November.