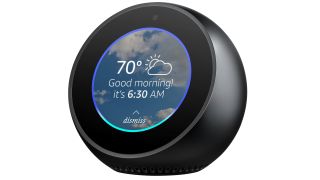 If you've noticed screen flickering on your Amazon Echo Spot, you're not alone. Dozens of owners have taken to online forums to complain about the issue.

On Reddit, user u/velders wrote that their 15-month-old Spot recently developed the issue. Amazon's support team recommended a new power cord, but when that didn't work all they could recommend was a hard reset.

"It didn't work so the second time, they said to do a factory reset (which I told them I literally just did 5 minutes before talking to them), but they insisted, and lo and behold, no change, it still flickers," u/velders wrote.

They also posted a link to a YouTube video (below) showing the problem.

Another user on the thread reported that their Spot started flickering after 13 months.

"Same thing happened to me last week. After about 13 months of ownership. Really frustrating," wrote Showstoppaslim.

They suggested that an Amazon software update could have caused the problem.

"When you push out a software update for a product that is “out of warranty” that causes a major problem, how can they say it is no longer their problem?" they wrote. "The lack of engagement with the community on software updates and patches is pretty pathetic when they are products users end up heavily relying on on a daily basis."

These are joined by many over on Amazonforum.com – a post on the issue from December last year has had dozens of comments since March from people suffering from the same problem. On that thread, an Amazon staff member named Zach S recommended a factory reset, and if that doesn't work, to contact Amazon's customer service for help. Some commenters say that leaving the device unplugged for a day or two will fix the issue, though others claim this is only a temporary fix.

Many of those experiencing problems say their Spots are just outside the one-year warranty and so Amazon won't repair them. In the EU, consumers are given a minimum of two years as standard against faulty goods or those that don't work as advertised.

An Amazon spokesperson told the BBC: "We are investigating. If customers have any questions or concerns, they should contact customer service."

We have contacted Amazon for comment and will update this story if it has anything to add.