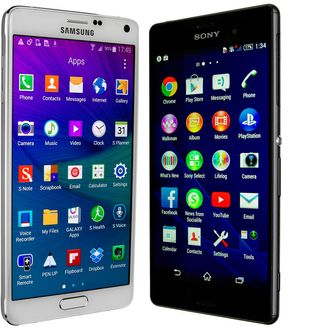 We've rounded up seven accessories that we believe to among the best available right now - from an HDMI stick that lets you mirror content to your TV to high-resolution audio streaming on your smartphone.

See them all: 7 of the best iOS accessory gift ideas

Chromecast is a small HDMI dongle that plugs into your TV. It gives an older TV some Smart credentials, while also giving newer ones extra capabilities.

Users can 'cast' content from compatible apps on their smartphone or tablet to the big screen, with compatible apps including iPlayer, Netflix, YouTube and Now TV. The option to cast your whole laptop screen (in beta, currently), means pretty much any content can make it to your TV.

Some Android smartphones - such as the Sony Xperia Z3, Samsung Galaxy Note 4 and LG G3 - support high-resolution audio. But how do you access high-res content on the go? Qobuz has the answer.

While the first-generation apps had some foibles - thankfully new mobile apps have just been released - its superior sound quality more than makes up for it. You can save tracks for offline listening too, but with them being CD-quality FLAC files, they will take up a fair bit of space...

...which is why you need some extra storage. Like this 128GB microSD card. For devices that support the extra storage option, this card will be able to hold an awful lot of music. Lower capacity versions are of course available, but for the ultimate in smartphone storage, look no further.

And you'll no doubt want a decent pair of headphones to listen to all that high-resolution music, yes? These Beyerdynamics blew us away this Awards season, walking away with the best headphones gong for the £200-£300 category. These cans offer a shedload of detail and bass levels are substantial.

Thanks to the addition of an in-line mic and three-button control, you should be able to take control of your smartphone's tunes.

The smartwatch has well and truly arrived in 2014, flourishing from poorly-designed accessories with limited featues to smart, useful pieces of wearable tech.

And the Moto 360 is the best Android-exclusive example, according to our sister site, Stuff.tv. The sleek and minimal design means it actually looks like a watch and, with Google's own Android Wear operating system installed, it runs smoothly and has a sackful of customisation options.

Read the Stuff review of the Motorola Moto 360

Get more Christmas present inspiration with our complete Gift Guide 2014