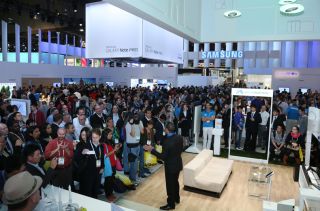 We'll be on the ground in Las Vegas from January 4th to bring you all the best coverage from CES 2015, with a bigger presence at the show than ever before. As an official CES partner, we’ll be hosting the International News Stage with our sister publication, Stuff, with a host of interviews and product pitches featuring key players in the industry.

We will also be announcing our Stars of CES on Thursday January 9th, the best of the show’s specialist hi-fi and home cinema products.

We hope to hear more news about content, too. The top streaming providers are now delivering some Ultra HD content, but it wouldn’t take you long to watch it, while Sony and Samsung have offered bespoke packages to their customers. But we need more.

And what about 4K Blu-ray? Tipped for a 2015 release, an announcement at CES would be ideal.

It’s not just the home that’s getting smarter, expect plenty of noise from car manufacturers too. We’ve seen the first cars to integrate streaming music with Rara Music, Napster and Spotify all making their way inside motors, and Apple is now involved with its own CarPlay offering.

We expect to see more tie-ins and, hopefully, better sound quality for music on the move and how we can control it. With Ford – creators of Ford Sync with Spotify – giving a CES keynote, it looks likely we’ll hear a lot more from the car companies.

Always the biggest draw at the show, it’s likely to be a case of evolution rather than revolution in the television world. But expect plenty of headline-grabbing TVs to appear, with more curved, Ultra HD and OLED sets as well as a full range of new 2015 flatscreen models.

We don’t expect to see any plasma screens but we should see plenty more 4K LCDs, plus some of the first Quantum Dot displays – which looks likely to be the technology of choice for more affordable panels.

Curved TVs and bendable TVs have sprung surprises in previous years, so we’ll be on the look-out for the next tech-twist – and it could be that 8K screens bring the wow factor, after LG showcased an 8K-ready set at IFA in September 2014.

Also expect to hear more about new picture processing technologies, with the likes of High Dynamic Range (HDR), driven by Netflix, likely to be a key TV technology to look out for on 2015 TVs.

MORE: The future of TV

'Smart’ has been a much-used (nay, over-used) word in the consumer electronics world for a good few years now… and we don’t expect that to change any time soon. Smart Home technology has its own section at CES for the first time, with the booming multi-room audio market playing no small part.

And now Apple is involved, having launched ‘HomeKit’ in iOS 8 in an effort to make the iPhone the remote control of the future home. We’d expect to see a wealth of apps and products in this market, and we look forward to seeing how multi-room audio and even video develop in 2015.

Streaming has usurped the download in the public consciousness in 2014, and we expect to see this trend continue apace at CES 2015 – hopefully with a renewed focus on quality.

CD-quality lossless audio would be a welcome addition to biggest mass-market players, most obviously Spotify (whose CEO has hinted about a CD-quality upgrade), while high-res audio streaming is the logical next step for us.

We expect to find out more about a new high-res audio offerings using Meridian's MQA technology, while Neil Young’s Pono Music store should soon be out of beta and ready to launch to provide content for the PonoPlayer.

And it's not just audio: Netflix and Amazon now offer 4K video and, as touched on earlier, we'd expect to hear much more about Ultra HD video at CES.

Our CES 2015 coverage from Las Vegas will begin on Saturday 3rd January.

MORE: CES 2015 news, rumours and what to expect