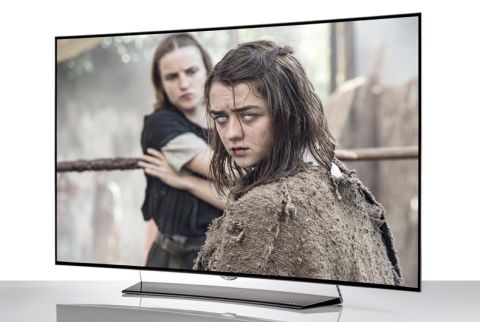 At CES earlier this year, LG was competing with Samsung and Panasonic to announce the world’s first UHD Premium-certified TV, but the Korean giant was even keener to get in first with Dolby Vision, Dolby’s own end-to-end HDR solution and the alternative to the HDR10 standard adopted by both video streaming services and Ultra HD Blu-ray.

LG is currently the only TV brand supporting the format, with US manufacturers Vizio and TLC covering the other side of the pond. At the moment, Netflix streams Dolby Vision alongside HDR10, and Universal, Warner Bros, MGM and Sony Pictures are all in talks on the disc front to include the system.

Although the two HDR standards could have waged an ugly format war and given potential TV buyers a headache, we can all breathe a sigh of relief. With LG tellies, it’s not a case of either/or; they are also compatible with HDR10, so can play everything we have in HDR now and what we can expect in the near future.

LG’s 4K OLED range, very much the talk of the TV town last year, continues to dominate the company’s 2016 line-up, and the OLED55C6V belongs to the next-to-bottom C6 range. Passive 3D support separates it from the lower-ranging, flat-panelled B6 series.

The OLED55C6V meets the UHD Premium standard – a universal certification showing it conforms to the stringent specification.

That means that, alongside HDR support, it has a 10-bit panel capable of producing more than 90 per cent of the DCI P3 colour standard, and because it’s OLED, a minimum of 540-nit peak brightness and black level of less than 0.0005 nits.

Physically, OLED arrived very much as a curved phenomenon – it was some time before LG took the iron to the technology and produced flatscreen models – but that’s been turned on its head. The OLED55C6V and its 65in brother are the only curved OLED screens in this year’s eight-strong line-up.

We hesitate to say ‘we told you so’, but it seems curved screens aren’t so popular after all. Still, it has an undeniable aesthetic value, and while the OLED55C6V doesn’t have the Picture on Glass design or the integrated soundbar stand featured on the top-tier E6 and G6 Signature ranges, it doesn’t look too shabby.

It is clearly weight-conscious. The top half of its panel is among the slimmest we’ve seen - more like a smartphone than a TV - and even the protruding power pack below keeps things relatively slimline.

The ‘floating’ stand we saw on some of LG’s models last year, where transparent acrylic connects the base plate to the panel, makes a welcome return too, this time in a more discreet black finish.

Since its introduction in 2014, WebOS has been the darling of TV software platforms and continues to gain our affection in its latest 3.0 version. It’s just as slick and intuitive, but now has a greater focus on content discovery. Two new tabs – My Channel and My Content – are now part of the colourful card-launcher home menu, offering shortcuts to your favourite channels and content.

On a side bar you’ll find recommended channels and live or upcoming programmes based on viewing habits too.

LG appears to have named WebOS’s three new features while on a day trip to The Wizarding World of Harry Potter. The first of these is Magic Zoom, which lets you magnify anything on the screen, pause and screenshot it if necessary – goal-line technology in your living room? Quite.

Magic Mobile Connection offers a straightforward way of connecting your smartphone to the telly via the LG TV Plus app, so you can share content as well as pair the telly with Bluetooth devices via your phone.

Lastly, the upgraded Magic Remote is now more geared to control set-top boxes thanks to the addition of power and EPG buttons. Otherwise the smart wand – combining an on-screen cursor with physical buttons – is much the same.

Taking centre stage is a search button for searching through content across live and scheduled TV, YouTube and video-streaming services.

Amazon, Netflix and wuaki.tv join BBC iPlayer, Demand5 and Google Play on the apps front. Freeview Play, which combines Freeview TV with the full array of UK catch-up TV services, will complete the bundle via an update at the end of May, says LG.

For now, though, that means going without ITV Player and All4 – you’ll just have to remember to record Gogglebox and Dinner Date.

Multi-view lets you watch two sources side-by-side, so you can keep an eye on the football scores while watching the latest Mission Impossible. And a music player app – in the form of a widget that can be moved anywhere on the screen ­– can play music files on your network or an attached device, even when the TV is off.

LG promises Perfect Black and Perfect Colour from its OLED TVs, and though it may just be marketing speak, we can’t argue against the former. Its self-lighting pixels provide truly lights-out blacks. Sceptical? Stand it next to a turned-off TV and see for yourself.

It’s a stretch, though, to label the LG’s colour reproduction ‘perfect’, as it sits on the rich side of neutral. But while it may not be the most natural palette we’ve encountered, there’s no denying that its full, lush hues are stunning – especially with HDR material.

Netflix plans to have more than 150 hours of HDR programming by the year’s end, available to anyone with an Ultra HD subscription, but for now we have to settle for season one of Marco Polo, which the 55OLEDC6V plays in Dolby Vision.

You may have run the THX Optimizer disc over your picture, but upon detecting HDR content (a small banner on the top right-hand corner flags when it does), the telly kicks into specific picture settings: with Vision, it’s Vivid, Movie Bright or Movie Dark – the last is the most likeable and gives you the most leeway for tinkering with individual picture settings.

The picture is clean, detail spills from every pixel and outlines are needle-sharp, if perhaps a little over-etched at times. You don’t have to be watching a Wes Anderson movie for colours to explode on the screen: armoury glistens, sun beams in subtle gradations, and the opulent interiors of temples are stronger than the warriors who inhabit them.

The LG’s meticulous depth perception and layering of mountains, lakes and deserts really capture the vast openness of the shots of rugged Kazakhstani landscapes that exist between action sequences, too.

We switch to Mad Max: Fury Road Ultra HD Blu-ray – plugging the Panasonic DMP-UB900 player into one of the LG’s three 4K- and HDR-ready HDMI inputs – and, upon detecting its HDR10 layer, the LG offers you Standard, Bright or Vivid HDR modes.

Standard is our preference as it’s the most adaptable. We take contrast down a notch and turn on a small degree of motion processing to smooth out minor blur. The result is a two-hour action-packed car chase that’s as polished and unruffled as Lego Man’s hair.

The richly hued reds, oranges and yellows that help give it its graphic-novel look is a visceral assault, and the LG asserts its enthusiastic palette to a degree of which even the film’s colourist would be proud.

Fire burns bright just pixels away from the jet-black bars, and red flares and truck lights are luminous against the night sky. If there’s so much as a glint on a tooth, the LG clocks it.

As we move down to Blu-ray, we’re still treated to the crispness, texture and dynamism that makes you want to expand your collection. Despite the mammoth upscaling task, the picture looks clean, attentive and no longer second best to a good Full HD TV performance.

Even with standard-def programmes, you can tell the LG is bending over backwards to keep picture noise at bay. Edges are a little smudged, but it looks respectable.

Thanks to LG’s partnership with Harman Kardon, the OLED55C6V sounds more full-bodied than its physique suggests.

While it doesn’t come close to the performance of a good soundbar or surround package, it’s perfectly listenable, and there’s no shortage of clarity, detail or volume.

If 2015 was the year of 4K, this is the year of HDR. Everyone is getting onboard, and while content is likely to remain touch-and-go until the year’s end, the OLED55C6V, which may as well have ‘future-proofed’ stamped across its forehead, is sitting there waiting with open arms.

If this is LG’s middle-of-the-road offering, we can hardly wait to see what its flagship models have in store for us.