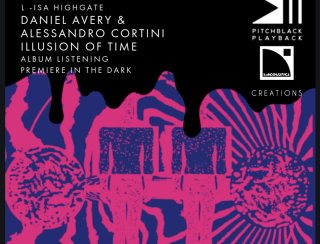 Blindfolded and lying in the foetal position on a bean bag surrounded by 40 other silent, horizontal listeners, we feel supremely cocooned – both physically and mentally.

But let's backtrack. If you haven't been to L-Acoustics' L-ISA showroom in London's Highgate, you should; L-Acoustics holds regular listening sessions on Fridays. It's a five-minute walk from Highgate tube station, and well worth it.

We have had the pleasure of the L-ISA 14-channel Ocean sound system before, but L-Acoustics is hosting an extra-special event tonight, hence the traipse up a leafy north London hill. This time, however, it's shoes off and blindfold on, because we're about to be treated to the premiere of Daniel Avery and Alessandro Cortini's latest work, Illusion of Time, in conjunction with Pitchblack Playback.

If you're not familiar with Pitchblack's work, the company organises listening sessions, inviting music-lovers to experience upcoming album releases and classic LPs as you've never heard them before: in a cinema or intimate space, in near-complete darkness.

The space tonight, for the first time, is the L-ISA showroom. Thanks to the 14 blue lights surrounding us (one above each Syva speaker), the space is calmly lit as we settle in. Pitchblack's founder, Ben Gomori, is about to change all that. He tells us to turn our phones off or put them on silent. It's going to get dark in here, and any notifications will light the place up.

There are no complaints. In fact, apart from a few giggles as punters revel in the scrunchy sound of wriggling into their bean bags, there's almost complete silence and serenity. A listener next to us shrugs and switches off his iPhone, whispering that if someone can't be without their smartphone for 45 minutes, perhaps they should rethink their relationship with tech.

We slip our Pitchblack Playback blindfold on. Ben tells us it isn't strictly necessary as the room will soon be very dark anyway, but we're here for the full immersive experience. The act of physically cutting off one of our senses should, so the theory goes, focus our attention on the others.

Ben also tells us that because we are practically lying on the floor (and the Ocean sound system is optimised for a standing ear height) we'll get a slightly more bassy performance tonight, but he assures us Avery and Cortini's brand new album sounds utterly great on this 14-channel system. And he's not wrong. There's no small amount of excitement in his voice, either – this is the first time Pitchblack has held a session here.

For the next 45 minutes, we're led through a bleak and windswept hillside, we climb tall and ever-encroaching trees, we're weighed down by the monkey on our back and we experience the jagged eye of a twister and watch thankfully as it moves on.

And, in a fleeting, blissed-out moment (during the title track, we discover later), we find chord progressions so sombre and beautiful that we think we might cry. At least, that's what it's like for us.

As the lights come on, another listener talks about having felt the bass shake down one side of his body, then 'watching' as it moved to the far corner of the room. A couple nearby dreamily utter, "That was great" in unison, then remove their blindfolds and laugh at each other.

For us, the most bizarre moment was feeling as though we were in a wind tunnel: gusts of wind had seemingly gathered, approached and whipped past our ears. Such was the clarity, we braced ourselves for the cold – but of course, no actual gale forces came.

We urge you to put aside your preconceptions, whatever your thoughts on these admittedly bizarre sonic musings. This was a new album, heard by all those present for the first time. We'd love to hear it again.

We'd also love to enjoy a well-played classic on this 14-channel system, for a nominal fee, in the dark – and chances are, we soon will.

The What Hi-Fi? guide to the best films and TV shows to test your system