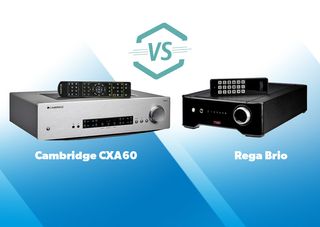 When the Cambridge CXA60 emerged in 2015, it filled a gap in the market for a brilliant mid-priced stereo amplifier. This highly accomplished amp with many features went on to win a What Hi-Fi? Award two years in a row. In fact, it’s our reigning champion.

But that could all change thanks to the delicate, yet ferocious, Rega Brio – a mighty upgrade we’ve waited seven long years for. This sixth-generation Brio sounds terrific, and we’ve been itching to pit these two five-star stereo amps against each other.

This is where your personal taste will kick in: these amps look wildly different, but they’re both undeniably smart, streamlined machines. Cambridge’s modern design looks more exciting, with plenty of buttons and dials. Rega’s more retro design is hard to argue with though, especially when it's as discreet as this.

While Cambridge gives you the option of choosing a silver or black finish, the Brio comes in black only.

The CXA60 has a ‘floating chassis’ design, sturdy aluminium build, and clean fascia peppered by well-placed buttons. It’s clear Cambridge has given plenty of thought to every aspect of the design, and it feels and looks like a high quality product.

The air vent on top of the amplifier isn’t just for show, either. It helps cool the class A/B amplifier powering the CXA60’s 60W per channel. Peek inside and you can see the toroidal transformer sited right in the middle of the chassis.

The Rega Brio has been revamped as well, from its updated circuit board layout to the swooped front panel design that’s reminiscent of early 90s Brios.

Every tweak to the circuits and power supply has been made to help isolation and keep the main signal path as direct as possible, in a drive for better overall sound quality.

There are now two separate power supplies in the Brio: the bigger one for the power amplifier section, the smaller for the input/phono stages and preamplifier.

The half-width design’s return is welcome – it looks smart and is ideal for those with limited space. But there’s more going on than simple cosmetics.

The chassis has been redesigned: it’s now made of a two-part fully aluminium case that helps its heat dissipation and reliability.

This 5kg amp is so reassuringly robust you almost get your money’s-worth in heft alone. The curved front and rearranged display are minimalist and elegant.

Only the volume dial (a hollowed-out metal ring that makes the amp look like a monocle-wearing dandy), a couple of buttons and red LEDs adorn the glossy front panel.

Both amplifiers are seamless in operation – we’d struggle to choose one over the other when it comes to daily use. The buttons respond instantly, with corresponding input names and LEDs lighting up when selected. We particularly like the smooth resistance of the gain controls, and how subtly they change the volume too.

The remote control with each amp varies in complexity – Cambridge's has dozens of buttons, Rega's is almost laughable in its simplicity – but they both become second nature to use after no time.

The sources you have will be fundamental in choosing your amp, and it’s here a fork in the road appears.

Because while the Cambridge CXA60 comes with plenty of analogue and digital connections, a hi-res DAC and even the option of adding Bluetooth streaming, the Rega Brio remains staunchly analogue-only.

The Brio has four line-level inputs, a phono input, some outputs for recording and a single set of speaker terminals. That’s it.

The Brio’s purely analogue approach may be a problem for some – especially if you have a range of digital-only sources. But if your main source is a turntable (or as long as your streamer or CD player has analogue outputs), the Rega should be more than sufficient.

A moving-magnet phono stage is its secret weapon, designed to work in harmony with its own superb Planar turntables - but it's fine with other turntables too.

The CXA60 also has four line-level inputs, but adds digital coaxial and a pair of optical inputs, a 3.5mm auxiliary input and two pairs of speaker terminals. That’s a great selection at this price (originally tested at £500, the CXA60 now costs more like £580 – much closer to the Brio’s £600 price tag).

It doesn’t have a built-in phono stage (one point for the Rega), but its internal DAC (which supports hi-res files up to 24-bit/192kHz) opens it up for use with a greater variety of sources and music file types.

You can plug your favourite pair of headphones into both amps. The CXA60 sports a 3.5mm jack, while the Brio has a 6.3.mm socket with its own dedicated circuit to ensure it doesn’t interfere with the main speaker signal.

If you’re still on the fence about which amplifier to spend your money on, performance will be the ultimate decider.

The Rega Brio is a terrifically musical amp. The Cambridge CXA60 is an enthusiastic crowd-pleaser. They’re both a delight to listen to, but the Rega has the edge here.

Everything we love about the former Award-winning Brio-R is here: its incredible sense of rhythm, its punchy dynamics, its sense of fun.

The new Rega Brio takes all of those qualities and hones them even further. The sound is clearer, more detailed and more muscular.

The Brio-R’s lean character is gone - the new Brio is a fuller, richer listen with gorgeous solidity running through every single note. The top end sparkles but there’s a sweetness to it, and basslines are delivered with depth and rumbling textures.

The Brio’s 50W per channel (into 8ohms) may not sound like much, but you only have to crank up A Perfect Circle’s Pet to feel the sheer force of wailing guitars and thunderous drums. It goes loud and it’s thrilling.

But the Rega hasn’t transformed into some overly muscular heavyweight. Its nimble footwork and rhythmic prowess is the true highlight, and it's what makes us play song after song through this amp.

It ducks and weaves its way around tricky compositions, tying all musical strands together in an authoritative, skilful way without ever losing its sense of fun.

Voices are intimate and expressive. You can hear the restraint in Corey Taylor’s usually roaring vocals in From Can to Can’t, while Tom Waits’s gravelly tones are beautifully textured and full of rawness in Alice.

The sustained build up of tension in Arvo Pärt’s Fratres is a real test of the Rega’s talents: the strings are light but urgent, and you can hear the squeaky texture of the bow scraping across the strings.

The leading edges of notes are stunningly precise, and there’s an impressive depth to the quieter moments. Almost as impressive is the fact the amp doesn’t lose its footing when the song reaches its crescendo.

The Cambridge CXA60 offers a more open and larger-scale sound than the Brio – it’s an affable presentation that will appeal to many, even if it can’t quite reach the punchy, articulate heights of the Brio’s performance.

But the CXA60 is immediately likable. It’s fluid, snappy and packed with enthusiasm. This is an amplifier that puts musical enjoyment high on its list of priorities.

That doesn’t mean it leaves things like detail, dynamics or rhythmic precision trailing behind – the amplifier skilfully handles complex arrangements and is capable of delivering subtle, accurate detail.

Stream The White Stripes’ Seven Nation Army and that iconic hook is bouncy, rumbly and has just the right amount of tautness to keep you riveted.

The CXA60’s presentation is slightly forward, but that's not necessarily to the amp’s detriment.

The whine and crunch of the guitar riff sounds textured and has plenty of bite, while the strained, ragged nature of Jack White’s voice is deftly conveyed. It’s a gripping, entertaining listen.

View all our Cambridge reviews

Just make sure you don’t partner the amp with any bright-sounding speakers, as they could easily provoke that forward, excitable treble (a warning we don’t need to give with the Brio amp).

The energetic performance doesn’t cross the line into unruly, overzealous territory, though, the Cambridge exercising plenty of control over a song’s dynamics and rhythms. Hans Zimmer’s compositions for Inception are appropriately brooding, and the tension is maintained throughout.

The strings in Time rise in slow-building intensity, while the drums lend a good helping of sombre weight. The dying piano notes at the end of the track have plenty of space to breathe in the open soundstage, sounding poignant and arresting.

It’s a solid sound from the CXA60 – one that manages to be exciting and easy to listen to in equal measure.

But the Rega Brio manages to dig a bit deeper and reveal more nuance with every note. Dynamically, it’s more dramatic and articulate. The CXA60’s detail and edges sound a touch soft compared with the Brio’s insightful, gripping delivery.

View all our Rega reviews

In pure performance terms, the Rega Brio is our preferred amplifier. The Cambridge CXA60 remains a hugely entertaining and capable listen, though – which is why both amplifiers keep their five star ratings.

The CXA60’s wide spread of connections and sleek design will appeal to many, its and big, enthusiastic delivery is a joy to listen to. We think you’ll love it.

The Rega, on the other hand, is something really quite special. It can hold its own against its bigger siblings – the £900 Elex-R and £1600 Elicit-R – thanks to a sparkling top end and a sense of fun that’s infectious. It’s an amp that can comfortably drive expensive speakers, too.

That’s quite an impressive feat for a £600 amp. An incredibly talented amplifier in every way, the Rega Brio will win you over from the moment you first hear it. We’ll even make allowances for the lack of digital connectivity – it sounds that good.

It’s the kind of amplifier that we want to leave on and play our entire music collection through. Again and again. Isn’t that how all good hi-fi is meant to be?

VERDICT: Excellent features and an exciting, upbeat sound – this Cambridge is a hugely appealing amplifier for £580

FOR: Detail, precision and dynamics in spades; punchy bass and clear highs; agile and rhythmic presentation; solid build and easy to use; good headphone output

AGAINST: No digital inputs

VERIDCT: An incredibly talented amplifier in every way, this Rega Brio is an utter delight to listen to