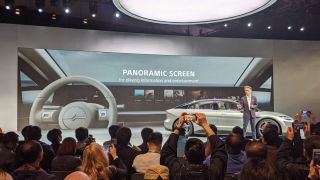 Sony made a car. There’s not much point in beginning anywhere else when we’re talking Sony’s highlights at CES 2020.

Sony CEO Kenichiro Yoshida began the press conference by saying that the aim of the company this year is get closer to people - closer to audiences and closer to creators. A car is pretty good for that for a start so here’s that and everything else that Sony seems to be focusing on this year.

Sony made a car

The S-Vision is a concept but a very real, very drive-able concept made by Sony (with a little help from a few partners). There’s been plenty of talk in the past about the likes of Google or Apple making a car. So, for Sony to have got in there first is a big feather in its cap.

It’s a seriously impressive achievement, of course, but it’s particularly interesting for us because of the possibilities of its in-car entertainment system which Yoshida-san outlined on stage.

First is the enormous and impressive panoramic touchscreen interface to control the entertainment with its display of content and navigational panel. More interesting, is that the S-Vision and Sony’s 360 Reality Audio could just be the perfect marriage of two great concepts.

Sony’s concept has multiple speakers built into each seat for full immersion and a car provides an excellent environment for such a total surround soundscape. With a growing catalogue of 360 recorded tracks on streaming services like Deezer and Tidal, the S-Vision, and cars like it, could become brilliant havens for enjoying audio, made all the more perfect by that silent running of electric motor.

As the artist intended

Whether Sony was talking music or video; TVs, mobiles or cameras, the end game was always about getting the content to the consumer as the creator intended.

In terms of 360 Reality Audio, it was about music producers taking the time to pick and place audio tracks in the soundscape and getting the feeling of that music over to the listener through its spatial structure as well as its tonal arrangement. Sony is demoing 360 Reality Audio at its show booth in Las Vegas through wireless headphones, a 360 firing wireless speaker and a soundbar as well.

For video, it’s the continuation of the Netflix Calibration Mode and the IMAX Enhanced certification for the top-end Sony TVs that offer a taste of what the artist intended.

For the filmmakers themselves, Sony’s imaging department has enabled volumetric video capture for total coverage of 3D space, along with eye-sensing light field displays so that artists can pick the exact angles they want the viewers to see. And better filmmaking, means better movies - now all we need are some good TVs…

Instead of blowing our minds with bendy screens and other TV concepts, Sony has taken a more mature, if less glitzy, approach to its CES 2020 TV announcements. It’s made the top TV tech of last year something that many customers might get to enjoy this year.

The 2019 8K TVs started at £13,999 for the 85in ZG9 Master Series. While we’ve not seen the 2020 prices just yet, 12 months on and now with a 75in option, there’s a good chance that the just-announced Sony ZH8 series will be considerably more affordable. It’s the same story for A9 4K OLED TV which is now available in a handy 48in size.

Even further down the pecking order, though, Sony has pushed the top-end features as far as possible. So, you’ll find the panel vibrating speaker technologies, Sound-from-Picture Reality and Acoustic Multi-Audio, as far down as the Sony XH90 range of full-array LED TVs, along with 120fps frame rates at 4K resolution. Speaking of which…

PS5 gaming is on the menu

There were more cameras held up in the air during the PS5 section of the press conference than at any other moment - which rather makes it all the more amusing that all the world got was a logo.

Nonetheless, it’s clear that gaming is very much on the menu wherever you go at CES 2020. For Sony, that comes through in its TV tech.

The company has made sure that its TV speaker technology has gone as deep as possible at every price point to deliver at least some kind of immersive audio experience. And even for sets which don’t promise high frame rate gameplay, there are easy connectivity options for all gaming devices as well as hands-free capabilities so that customers can fire up their favourite titles with their voices alone.

There has been a distinct lack of Sony audio products launched at CES 2020. Yes, there are the trio of Sony 360 Reality Audio concept devices on show but not one actual cold, hard product. It’s not a worry; it’s just a pity.

Perhaps we just got lucky back in August at IFA 2019 with Walkmans, headphones, and Signature Series speakers. Maybe Sony has something squirreled away behind the scenes in Las Vegas? We’ll see if we can sniff something out.