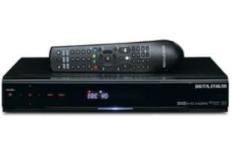 Just tops the pile in its price class, but it's expensive

This was the first Freeview HD PVR to come our way. Gauging the overall quality of a device, when it's the first of its kind, can be a touch tricky, but the good news is that the Digital Stream's initial very positive four-star verdict was right on the money.

For a start, Digital Stream has produced an extremely stable Freeview HD PVR, which is free from the glitches and messiness of some of its rivals.

True, the unit itself is rather big and lacking in style, but the menus are slick and sensible, and it responds quickly to commands from the remote.

Great viewing/recording flexibility
The DHR8205U produces the best picture in its price sector, though it's marginal. Images from BBC HD benefit from just a smidge of extra sharpness, and colours are natural and balanced, even when you switch to the altogether-more-tricky content from Dave.

Sound, meanwhile, is decently punchy and clear but, like most rivals, the Digital Stream was, as originally tested, incapable of sending out Dolby Digital 5.1 from its HD channels. A fix was made available as part of an upgrade and, having applied that, all works fine now over the digital audio output.

Interestingly, you can record two HD channels and watch a standard-definiition one at the same time, or vice versa, and with 500GB to play with, you're likely to be recording a lot.

So why not five stars? Well, it only just tops the pile, and is relatively pricey.