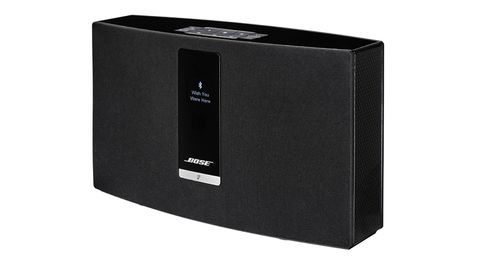 Bose is heading in the right direction with the latest SoundTouch 20, but sound quality still needs improving

Will it be third time lucky? Bose is certainly hoping so with its SoundTouch 20 Series III, which joins the SoundTouch 10 and the bigger SoundTouch 30 Series III.

While we handed the previous version of the 20 a less-than-generous three stars – its good looks and clear sound were let down by limited file compatibility and overstated bass – the product has come a long way since.

Firstly, its predecessor’s AirPlay has been replaced with Bluetooth for more universal, Android-friendly connectivity. We’ve never been won over by the sound quality you get streaming through Airplay, so this is a good move which could win over a bigger crowd.

Bose says through 802.11n dual-band wi-fi the connection is stronger and more reliable this time round too, which can only be a good thing, especially for those looking to buy into the range’s multi-room sell.

When reviewing the previous SoundTouch 20, we were disappointed by the lack of WAV and FLAC support, but with both now compatible, things are looking up.

Sadly, hi-res remains on the shelf (16-bit/44.1kHz is the limit), but Bose hasn’t ruled it out in future editions.

VIDEO: How to set up Apple AirPlay

Streaming services availability is fairly modest too, but Spotify Connect, Deezer and iHeartRadio have been added to the existing Pandora and internet radio stations.

It’s an improvement, although the likes of Tidal, Apple Music and Google Play Music are needed if the SoundTouch 20 is to live with the topflight mid-market wi-fi enabled speakers, namely Sonos and Bluesound.

Not a fan of manuals? You no longer have to use a PC to set-up the speaker either, with everything now more conveniently app-based.

Whether you’re setting up one speaker or several, it only takes a matter of minutes and the steps – the most strenuous of which is signing up for a Bose account – are easy to follow.

Thankfully, some of the SoundTouch 20’s heritage has stuck around. This latest version looks more or less the same as ever – a shrunken SoundTouch 30 – with its chunky exterior’s clothed front, clearly readable OLED display down the middle and glossy top, which has simply been given a more attractive pattern. It’s shelf-friendly, and design-wise, ‘classic Bose’ – smart yet safe.

As well as Bluetooth, it can still stream music directly over the internet – over the air or via Ethernet cable – from any computer, NAS drive, tablet or smartphone connected to the same network. Aux and USB inputs let you hardwire your portable music devices too, the latter another route for receiving software updates.

Multi-room has been, and still is, a huge pull for the range. You can group multiple SoundTouch products together for a multi-room system, playing the same music across all speakers or different music in zones.

While the SoundTouch Controller app is entrusted with multi-room set-up – grouping (and ungrouping) speakers is intuitive, and juggling different speakers is easy ­– it’s just as useful as a remote control for a SoundTouch speaker.

One of the most comprehensive apps we’ve seen, it uses its interface efficiently; all music available can be found on a pull-out bar, where you can also access ‘recently played’ songs. Six ‘preset’ buttons let you favourite artists, albums, playlists or internet radio channels for one-touch access.

It’s a neat shortcut, and one of the SoundTouch’s biggest assets: ideal for quickly tuning into your favourite radio station or replaying your new favourite album.

We approach the SoundTouch 20 Series III with a certain expectation of sonic weight and bottom-heaviness, and not just because of its predecessor’s character – neither the Bose SoundLink nor SoundLink Mini shied away from that either.

Low-end extension is deep, though bass levels are still a little overegged – it’s the kind of table-shaking sort you might appreciate at a party (play Krossbow’s Blackout and you’ll see what we mean), but not for casual listening, especially if you like tip-top balance.

Unsurprisingly, the unit won’t take kindly to being placed in the corner of a room.

The bass driving Frankie & The Heartstrings’ Hunger weighs the rest of piece down, the delivery lacking the speed and agility (crispness and punch too) you get from the Bluetooth-only, multi-Award-winning Geneva Model S Wireless DAB+.

That said, it gifts the midrange the solidity and body to capture Greg Lake’s strong, thick vocals in Emerson, Lake & Palmer’s Lucky Man, and there’s no scarcity of clarity and detail as acoustic harmonies, drums and cymbals come to the fore.

It’s a comfortable listen – insightful and clean – and while it may favour a club beat, doesn’t turn its nose up to the more folksy sound of a man and his guitar.

Scale, power and volume distinguish the SoundTouch 20 from its little brother, the SoundTouch 10, and they are more than decent for its price and size.

There’s scale for the track’s synthesizers to soar beyond the background vocals, and the dynamics for it to die down on cue for the next verse.

If you’re happy with Bluetooth connectivity, then something like the Geneva makes sense.

But if you want the added convenience and functionality of multi-room and wi-fi as well, the SoundTouch 20 III is a more pertinent choice – not to mention a better proposition than its predecessors offered a year or two ago.

There’s still room for improvement in the sonic and streaming service department, but right now it shapes up to be a good value option for those who are after the whole works.