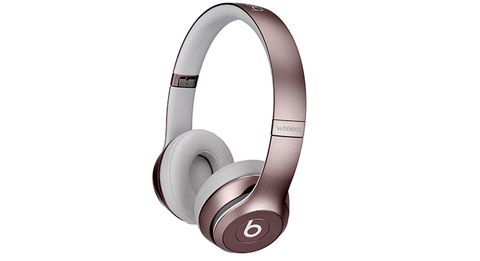 While the balance here is much improved on earlier versions, detail and dynamics fall short of the best

It’s hard to deny the influence Beats headphones have had on the mainstream headphone industry in recent years. While their popularity hasn’t gone down well with everyone, the fact remains that Beats made it cool to spend money on headphones and, for that at least, the industry should be grateful.

But with their popularity, the Beats range has grown, not to mention improved. While it has become the done thing to dismiss Beats offhand as bassy ne’er-do-wells, the tonal balance has been readdressed since the original Studio headphones were launched, earning them several four-star reviews in the current line up.

The Solo 2 Wireless are, unsurprisingly perhaps, a wireless version of the Solo 2 headphones, the smaller on-ear sibling to the larger over-ear Studio range.

As is often the case with portable headphones, the Solo 2 Wireless are hinged so they can be folded down and made easier to carry, and come with a neoprene zip case to keep them protected in your bag.

The body is largely plastic, which keeps them nice and light, and there are 11 colours to choose from if the fetching rose gold colour of our review sample doesn’t take your fancy.

The plasticky look and feel might not be to everyone’s taste, but you’re going to have to spend a bit more money to get the more premium finish of the B&W P5 Wireless or the Sennheiser Momentum 2.0 Wireless.

The earcups are made from a soft, leather-look material and there’s a padded headband, so they sit comfortably on your head. The grip is certainly on the firm side of things though, which makes them great for exercising in but perhaps a bit too tight for long wear. They make our ears a little hot too.

Being wireless, there is of course Bluetooth on board, and a built-in control system – you click the Beats logo on the left earcup to control track and volume.

The power button sits on the right, with five small LEDs underneath it to show how much battery life you have left – Beats’ claim of around 12 hours seems accurate to us and, for their size, pretty generous to boot.

Should you be caught short on battery life, they can be used wired, with the included cable also featuring inline controls. Charging is done via microUSB.

Pairing the headphones with your phone or laptop is simple – an LED on the left earcup flashes to show it’s in pairing mode, and changes to solid once it has been paired.

Start listening and it’s a sound we’re familiar with – rich, full-bodied and full of attack. There seems to be very little difference in character between wired and wireless listening, which some lesser headphones don’t manage as convincingly.

Listen to Kanye West’s Spaceship and the bassline is warm and well pronounced without being overpowering. There’s no denying its slightly bolder, more forward character in comparison with other elements of the frequency range, but it isn’t boomy or unwieldy, though it could be a little tighter for a more refined sound.

That’s not really what these headphones are about though – their emphasis is on drive and attack. They deliver a fun and exciting sound, but this skew sees them fall down in their handling of nuance and fine detail.

While they’ll throw themselves enthusiastically behind any piece of music and do a good job rhythmically, listen with a more critical ear and you’ll realise they aren’t actually telling you much about the track at hand.

Detail levels don’t dig much below the surface and dynamic subtlety falls short too – there just isn’t enough stretch to their presentation to allow instruments and vocals to shift between loud and soft with any real authority.

This also has an effect on the midrange, which could do with a touch more bite to be as expressive and engaging as we’d like.

The real struggle here is the cost. As ever, the Beats branding appears to have put a premium on the price and, at £230, they sit between two great pairs of headphones – the AKG Y50BTs at £150 and the B&W P5 Wireless at £330, either of which make much more sense at their price.

If you want a bold, upfront pair of headphones that look good and carry some kind of street cred, the Beats Solo 2 Wireless are ones to consider.

However, we’re not convinced their performance really justifies the pricetag, especially when there are better options out there that will give you more.

See all our Beats reviews