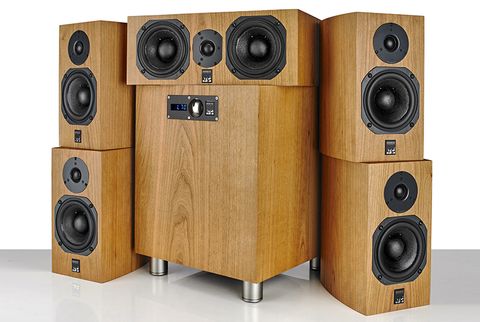 If you’ve £3250 to spare, and you aren’t trying to fill an auditorium, this speaker package is unlikely to be bettered for a long while

Every now and then precedent counts for very little, if anything; listen to almost every great band’s third or fourth album. Thankfully for ATC, and our eardrums, its C1 surround speaker package does a distinguished family proud.

The set-up comprises four ATC SCM7s, which are standmounter monitors, each sporting a 25mm soft-dome tweeter and 12.5cm mid/bass driver, a C1C centre to match (though with a pair of those mid/bass drivers), and the C1 subwoofer boasting an impressive 31cm, down-firing bass driver.

Unless you’re a complete stranger to ATC products you’ll recognise the aesthetic.

Our test kit is in what ATC names cherry, which is essentially light brown, or there’s the option of black ash (black), all in the company’s tidy yet undoubtedly smart trademark style.

We’re somewhere between wanting to look at them and thinking we'd happily ignore them and let the music play.

As it's a package built exclusively of standmounter speakers, you’ll also have to shell out for some decent speaker stands – but they shouldn't be disproportionately expensive and the C1s' sealed-box design means they are less fussy than some about positioning.

In terms of physical considerations, it’s an ideal package for any small to medium-sized room.

We BluTack the C1 system to our Atacama speaker stands – the standmounters have flat wooden bases so you’ll need to tack them down lest you lose some of the sonic body – wire up to a Yamaha RX-A3060 AV amplifier and, having let them run in over a weekend, play a Blu-ray of 300: Rise Of An Empire.

Immediately we’re drawn to the way in which this package integrates its speakers – thunder and flying arrows crack and sail behind us with exceptional detail, while not dominating the main action or dialogue.

Given that we have modestly sized standmounters rather than big floorstanders here, you might expect the sound to be lacking in weight. It's not. You’ll be pleasantly surprised by how rich the surround effects are.

You’ll likely require something bigger if you’re filling a large room, but we can’t deny the ATCs their impressively wide sense of space.

Despite perhaps not having the muscle to properly fill an area the size of our listening room (8m x 6m), the sound is anything but boxed in, giving a great sense of scale and distance in tune with what’s happening on our projector.

In some ways you might have expected us to begin by praising the centre speaker, given its smorgasbord of fortes. ATC says the C1C centre is designed to complement the SCM7s you have in the corners of your room, and it certainly shares their solid, balanced tone.

Even in the heat of battle, with a busy score and even busier list of sound effects, their edges are neither sharp nor smoothed: it’s a balance that has us almost forgetting to listen critically and just becoming lost in the film.

Perhaps the most important asset for any centre speaker, though, given it will be handling most of a film’s dialogue, is dynamics.

We could probably have picked a more difficult film for the C1C’s exam, given the over-acting in 300 is rife almost to the point of secondary-school theatre production, but nonetheless the level of expression is a delight.

It’s easy to say the most important aspect of a film is its content, but poor dynamics will ultimately leave all your characters sounding achingly bored which, unless you’re watching some mid-2000s coming-of-age indie drama, is far from what your director intended.

Essentially, it’s much more an immersive experience if your speaker package can effectively render vocal expression. The ATC C1 can.

A word on the sub: it’s just about light enough for a few of our team to lift alone without putting their backs out, but packs more than enough of a punch that you won’t be suffering from bass envy.

Rumbles are indeed rumbles – you can feel ships colliding through the soles of your feet, underlining the solid body of the rest of the package with authoritative weight, and a dial on the front allows you to tweak the bottom end so you do or don’t madden the neighbours, whichever is your preference.

We’ve mentioned dynamics, which the C1 package masters both in terms of ‘quiet to loud’ and those more nuanced levels of expression, but the ATC has also refined its unimpeachable sense of timing.

If you’ve seen this 300 sequel, you’ll know much momentum is lost through its ridiculousness, but this package is able to claw some of that back through its presentation of the film's music. It’s exceptionally fast, building anticipation as we head into each battle and firing each arrow with uniform precision.

Which all leads us to the point that this is not simply a product for home cinema. If you have a particularly accomplished AV amp, these SCM7s can be enormously entertaining with stereo music.

Using the same Yamaha amp, we spin Lou Reed’s Transformer on CD and allow ourselves to be serenaded with tales of New York cross-dressing.

It’s a wonderfully musical performance, with all you’d expect from so proficient a manufacturer of studio monitors, and one which could only be bettered by adding more stereo-focused components further up the chain.

We suppose the highest praise we can offer ATC here is that it gives our considerably more expensive PMC reference system a run for its money.

By that we don’t mean the two systems are exactly on a par, but that neither is lacking in any department – their characters are equally appealing.

In a room a little smaller than the one we have for testing, at the moment we can think of no better alternative for the money. A consummate triumph, to be sure.

See all our ATC reviews