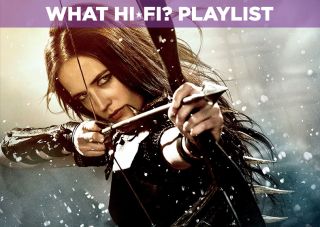 Men in underwear. Hacking and slashing. And because these are Classical times, everybody has capes. Super-slow-motion makes a meal of flesh (glistening), blood (splattering) and fabric (billowing).

Everyone likes a good underdog story, and the idea of three hundred (unfeasibly hard) men holding off a million certainly ticked that box. Then there was the rampant homoeroticism and stylised presentation, which made it equally hilarious and epic.

300: Rise of an Empire tries, and partially succeeds, to replicate the same formula. Textbook sequel syndrome.

But curiously, this isn’t really a sequel. It’s context for the events of the first 300. Or rather, an excuse to show all the fights that take place before, during and after.

That, and the introduction of Eva Green, is how we make do without Gerard Butler’s shouting. She plays the villain who sparks the entire Persian invasion of Greece, and is a more-than-worthy centre of attention for the film’s brisk 102 minutes.

It’s not enough, however. Even Green’s relentless smouldering can’t cover up the Greek army’s utter lack of personality. There’s no real reason to root for those who are clearly supposed to be the good guys. And so the fights become boring in no time, even if they are delightfully ridiculous.

At least there are a few naval battles. These are an unexpected and very welcome treat. There’s actually some strategy involved, which offers a much-needed change of pace. They’re tense and spectacular, and it’s a shame there aren’t more of them.

As with the first 300, the film has a very specific, very stylised look. Colours are desaturated, and more often than not the backgrounds are CGI.

But there are many chances to test black levels, and the super-slow-mo carnage is a great challenge for your system’s motion-handling capabilities.

The DTS-HD Master Audio 7.1 soundtrack is a delight. The many effects are weighty and aggressive, speech is clear, and Junkie XL’s score is appropriately anarchic.

Fans of the first film will find enough to enjoy here. But nobody should be under any illusion that 300: Rise of an Empire is anything but a load of rubbish. Delightful, utterly insane rubbish.