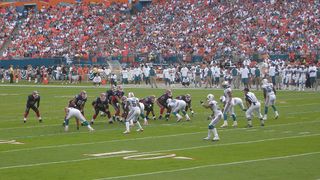 It's Super Bowl time and the battle for the Vince Lombardi Trophy in 2020 is on. It's the Kansas City Chiefs vs the San Francisco 49ers and below you'll find all the information you need on how to watch Super Bowl 2020 in 4K, on what channel or live stream wherever you are.

The first and most crucial piece of information is the Super Bowl kick-off time and that's at 6.30pm EST, 5.30pm CST, 3.30pm PST on Sunday 2nd February for those in the States, and at 11.30pm for the UK. Elsewhere, it's 3rd February at 0.30am CET for Europe and 7.30am for Australia. Set your stopwatches, mark the date in the calendar and, if you're not in the US, lay down the ground work for your sickie.

AFC champions Kansas City Chiefs – who lost out to the Patriots in last year’s Super Bowl – will be desperate to get a second bite of the cherry and win their second ever NFL championship. For the NFC victors, the 49ers, it's a shot at a sixth title and could end a 24-year wait since the latter days of the Jerry Rice era.

The game takes place at the Hard Rock Stadium, Miami, home of the Dolphins, for the for the sixth time. The 64,767-seater venue will play host to a Super Bowl halftime show co-headlined by Jennifer Lopez and Shakira, and reportedly featuring special guests Pitbull, Beyoncé, Ja Rule, and Wyclef Jean. Demi Lovato will perform The Star-Spangled Banner.

Want to see every throw, from the first to the last? Read on to find out the best ways to live stream the NFL playoffs on your TV or mobile device wherever you are...

Watch Super Bowl 2020 live on BBC One for free

If you want to soak up the Super Bowl for free, you can watch Chiefs vs 49ers live on BBC One in its entirety. Ex-NFL footballers Osi Umenyiora and Jason Bell will be the pundits on hand in the build up and through the game itself with the programme broadcast on both BBC TV and the BBC Sports website.

If you're outside the UK, you can still catch all of the action live. Just get yourself a VPN. We've listed some of the best VPN options below.

Watch Super Bowl 2020 anywhere in the world using a VPN

We'll look at the TV and live stream options for USA-based NFL fans below, but even after spending all that money on a subscription package, it's highly unlikely you'll be able to use it when you're outside of your home country.

So if you're working abroad or just want to access live NFL coverage from (almost) anywhere on the planet, it's a good idea to get yourself a VPN. A VPN (Virtual Private Network) can spoof an IP address that is local to the server you’d like to access. That way your TV service provider will think that you’re in the correct country – and allow you to watch Super Bowl 2020.

VPNs are as useful for banking as they are for trying to watch video content or access websites that people in your location are not supposed to do. They encrypt the data passing between you and the server, so that the information remains private.

So, whether you want to watch Super Bowl 2020, enjoy another country’s Netflix library or just keep your browsing data private, then a VPN is well worth considering.

Once you’ve made your choice, all you need to do is sign in to your VPN service through whichever device you’d like to use to watch the Super Bowl. When prompted to select a server, you need to pick one which is based in the country whose content you’d like to access. Then navigate to the relevant video streaming app or website and you’re in.

Coverage of the Super Bowl in then US cycles between the three main networks - CBS, Fox and NBC and, for the 2020 final it's the turn of Fox. What's more, for the first time the Super Bowl will be broadcast in 4K HDR using the HLG standard.

Even if you don't have access to the NFL on Fox channel over-the-air, you can still watch the Super Bowl in 4K HDR streamed on FOXSports.com or the Fox Sports apps for free. All you need to do is create an account and, bingo, you're in. You can enjoy the coverage in 4K HDR on Roku devices and Amazon Fire TV 4K. Apple TV brings access to the 4K resolution but only in SDR.

For HD quality, you can use iOS, Android, Xbox and Samsung smart TVs. However, don't get too caught up in the 4K promise. The cameras at the game will only be shooting at 1080p. The signal will be upscaled by Fox. If you have a 4K TV, then your TV could also do the upscaling.

If your cable provider doesn't offer access to the Fox network, if you don't have cable  and, if you can't seem to access the free Fox stream, then don't fret. There are other options.

Those already with an NFL Game Pass get the Super Bowl thrown in but you can also just buy the Super Bowl for $9.99 and watch it live and time-shifted on apps across a host of devices including Fire TV, games consoles, mobiles, tablets, laptops and smart TVs.

For $54.99 per month, fuboTV gets you get access to NBC, Fox, CBS and the NFL Network – but not ESPN. That'll cover you for the Super Bowl and a lot more besides. However, you can watch it for free on fuboTV if you've not already used your 7-day free trial.

YouTubeTV ($50 per month) is only available in selected US cities but carries nearly all of the networks showing NFL games live. The only channels absent are NFL Network and Red Zone. Fox is very much in the picture, however.

Hulu with Live TV ($44.99 per month) grants access to NBC, Fox, CBS and ESPN. The NFL Network is MIA but, if you've already used your fuboTV free trial, Hulu has one too.

Head over to StubHub and you'll find seats popping up all the time between now and Super Bowl 2020 kickoff. At the time of writing, prices sit at a minimum of $4,840 for anyone looking to get a ringside seat at the Hard Rock Stadium, Miami, to watch the Kansas City Chiefs vs San Francisco 49ers.

If you can hang on until the last minute, you're likely to get tickets for significantly less but you might need to be camped out in Florida already to be able to capitalise.

However you plan to watch Super Bowl 2020, enjoy the big game and may the best team win.