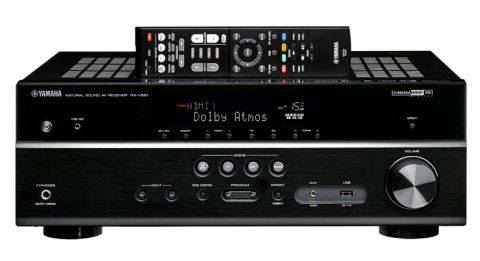 Yamaha’s £500 AV receivers have had to bow down to superior rivals from Denon and Sony over the past couple of years, but 2016 could just be the year that the tide turns back in Yamaha’s favour.

The company is due a comeback, not least because the Yamaha RX-V581 is a beast of an amplifier.

The Yamaha RX-V581 is the sturdy rectangular box we’ve come to expect of AV receivers.

It’s a touch shallower and lighter than its rivals, such as the Denon AVR-X2300W and the Pioneer VSX-1131, but the build quality is as solid as ever. It’s a relatively easy amp to accomodate.

Fire up the John Wick Blu-ray, and the Yamaha relishes every second of the action-packed film. The way it does bass is superb. The low end goes impressively deep, more so than we’ve heard from any receiver at this price.

It’s a powerful performance, but there’s a mature way in which the Yamaha handles all that brawn. That bass could easily overpower all other frequencies, but it doesn’t. It underpins the detail, resulting in a satisfyingly solid sound.

Gunshots are piercing, and there are layers of texture in the reverberations after the trigger is pulled. Every car crash is a raucous grinding of metal on metal, and the Yamaha makes you fully aware of the scale and destruction of each impact.

The edges of notes are precise, and at no point does the low end start to go boomy or lose its shape. Yamaha keeps its thunderous approach on a tight leash.

There is a touch of brashness at the top edge, when shattered glass and explosions make you wince. It doesn’t stop the Yamaha from being an exciting listen, though.

All of that detail and power envelops you in a large soundfield, and Yamaha’s prowess with surround effect just keeps getting better.

Flying objects sweep effortlessly across from speaker to speaker, demonstrating the height and weight of which the Yamaha RX-V581 amp is capable. You can almost feel the movement of spaceships soaring above you.

Where the Yamaha takes a dip is with delivering voices. It’s not as precise as the Denon AVR-X2300W, for example.

Even with the Pure Direct mode turned on (which we would recommend for the best sound performance), the midrange isn’t quite as subtle and clearly defined as the rest of the amplifier’s talents.

We want it to convey more expression. The Denon is more adept at conveying emotion in dialogue; the Yamaha is just a touch reticent in comparison.

The Denon’s way with voices keeps you captivated. The subtlety and fluid dynamics engages you – the build-up to the flourish when the Enterprise is revealed in Star Trek has a sense of excitement and wonderment to it.

On the Yamaha, the swell of music doesn’t quite reach that soaring high and you don’t get last ounce of flare from the horns. It’s a small difference, but could tip the balance in favour of one amp over the other.

But the Yamaha can’t be contested for its power and impact. That punchy rhythm is great when you’re listening to music, with songs played with enthusiasm and drive.

The Denon is predictably subtler with voices, but put the Yamaha in two-channel mode and its music performance is surprisingly enjoyable compared with other AV receivers.

We’re constantly amazed at the amount of features that manufacturers are able to include on an AV amp for just £500.

Dolby Atmos and DTS:X are becoming mandatory ticks on the ever-increasing specifications sheet, with the RX-V581 capable of a 5.1.2 Atmos configuration.

With wi-fi and ethernet on board, the Yamaha is more than just a home cinema surround amplifier; it’s the hub for any streamed music in your house. AirPlay, Bluetooth and DLNA let you stream music from smartphones, laptops and NAS devices.

The amplifier is also part of Yamaha’s MusicCast multi-room system, which lets you stream content from any other Yamaha kit you have in your house using the MusicCast Controller app.

Yamaha is also the first receiver to provide native support for Qobuz, which must be good news for subscribers of the CD-quality streaming service. For everyone else, Spotify Connect remains a hassle-free way to play millions of songs.

The amp supports hi-res audio 24-bit/192kHz files, too. The USB port in the front does more than charge a smartphone; it can play DSD files off a memory stick, too.

Connectivity seems a little sparse on the back panel, with only four HDMI inputs and a single HDMI output provided. It might be enough for most, but it feels somewhat lacking when you remember that Denon and Pioneer offer seven to eight HDMI inputs and at least two outputs as standard at this price.

On the plus side, all HDMI connections are capable of Ultra HD 4K/60p and HDR passthrough. They are also HDCP 2.2 certified, which means you’ll be able to play 4K Blu-ray discs and sources without any hiccups.

Digital inputs include two coaxial and one optical, while there’s a smattering of component and analogue inputs available as well.

Yamaha has made the set-up process as simple as possible. The built in YPAO calibration and included mic measures your room’s acoustics swiftly and accurately.

If you need to make any tweaks, the simple menu is easy to navigate for the various speaker settings.

The RX-V581 responds instantly to any changes. The remote control is responsive, the volume control turns smoothly, and you can switch to Bluetooth, network and USB playback with the press of a button.

For once, though, we prefer using Yamaha’s AV Controller app. The remote control is of course the obvious choice when you need to adjust the volume, but it’s far quicker and easier to select the input and sound mode you want in one go using the free app.

The colourful, labelled icons are neatly laid out and the app is fuss-free. It’s more appealing to use than cycling through all the options in the remote, hoping you land on the one you want.

The RX-V581 is an exciting amplifier, and the way it handles bass and sound effects is sure to whet the appetite of any home cinema fan.

It may face fierce competition from the Denon AVR-X2300 at this price, but we think the Yamaha’s muscular presentation can sit comfortably next to its rival five-star receiver.

It’s definitely one to put on your home cinema shortlist.