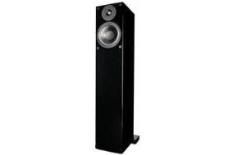 Whatever you do, don't be listening to a brand-new pair of Square Twos. They sound terrible straight from the box.

Thankfully, given a lengthy run-in (at least 72 hours is a good idea), the Square Twos turn in a performance that's quite amazing at this price.When it comes to dynamics, detail resolution or agility, these are good enough to worry many a true high-end speaker – and yes, that includes some of Wilson Benesch's own models.

Rarely do we hear the Gladiator's soundtrack so rousing while remaining so utterly composed. Instruments are defined superbly, and it's easy to follow the numerous musical strands, even when the soundtrack gets really busy. Did we mention the Square Twos are fast? Sorry, that's an understatement.

It's a quality that works particularly well on rhythm-driven music like Prince's Lolita. As you can probably guess, we like these towers an awful lot. However, their presentation might not be to all tastes.

The bass end is very taut, but not the weightiest around. ATC's SCM 40s sound more authoritative and make a better job of delivering scale – though unlike the Square Twos, they can't be used close to your room's rear wall.

Again, system-matching rules
Also, part of this speaker's lively nature and resolution is a result of a rather enthusiastic treble performance. The top-quality tweeter stops this from being a problem in a well-matched set-up, but if you favour a rich, warm sound or have a hint of aggression in your electronics, these floorstanders probably aren't the speakers for you.

Finally, note that the Square Twos have a relatively small footprint and just three spikes – a design that brings certain sonic benefits, but which also makes them very easy to knock over. You should bear this in mind if you have kids, pets, or both in your home.

Dig deep for the Square Twos
Practical issues aside, though; partner these stereo speakers with the right equipment, and we truly believe the Wilson Benesch Square Twos deliver the finest sounds available at this price – and you have to spend a lot more to better them.

Hear them in full flow with a classic dance track such as Left­field's Space Shanty or Open Up, and we're sure you'll be in total agreement