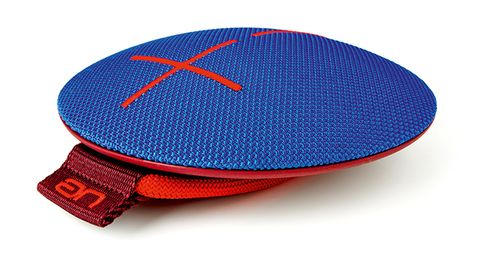 Super-portable, waterproof and with a great sound, the UE Roll is the perfect on-the-go companion

The current Ultimate Ears wireless speaker line up has been impressive so far, with two five-star reviews in the bag for both the Boom and Megaboom portable speakers.

Now the spotlight is on the newcomer and baby of the group, the UE Roll, and not only is its name unlike the family convention, it looks very different to its stablemates too.

Departing from the tube-shaped design, the UE Roll is instead disc-shaped and small enough to sit comfortably in your palm. The front is covered in a textured fabric (with plenty of bright colours and patterns to choose from), with the brand’s iconic enlarged volume controls stitched on to it, while the back has a hardy, rubberised finish.

There’s a stretchy bungee cord attached to the back, which allows you to hang the UE Roll wherever you please.

Alternatively you can stretch it round to slip behind the Roll’s integrated hook, allowing you to secure it to your bike or backpack. Everything about the Roll’s design feels really well thought out – there’s nothing included ‘just because’.

MORE: Behind the scenes at Ultimate Ears' R&D lab

Controls are also placed on the back, and are kept simple with just a power and pairing button, while physical connections are dealt with by a microUSB charging port and 3.5mm input for hardwiring.

Most people are going to make use of the UE Roll’s wireless capabilities though, and on board is A2DP Bluetooth, with an impressive range of up to 65ft (up from 50ft on the Boom).

Don’t let the Roll’s size fool you either. This is a sturdy little speaker, which is both waterproof up to 1m in depth for 30 minutes and shockproof against knocks and drops.

It manages to squeeze plenty of performance into its diminutive size too, packing two 19mm tweeters and one 5cm woofer, the latter a scaled-down driver from the Megaboom.

The result is a sound that is much bigger – and better – than you would expect from a small speaker.

The balance of sound has been very well considered for this type of speaker – one that’s likely to be used outside and on-the-go. The Roll’s presentation puts the midrange front and centre and slightly forward, with plenty of clarity that allows vocals and high-mids to punch through and take the limelight in a mix.

The treble is clean and crisp, if slightly clipped at the very top, but the result is that it never sounds sharp or harsh, even at volume. It’s a compromise that we’re happy to make, and above all one that really works for this type of speaker.

With its own dimensions as a restriction, the amount of bass this small unit is capable of is understandably limited, but what is there is solid and well handled, with no distortion or boominess.

This all culminates to produce an exciting, up-front sound, and one absolutely suited to purpose at this price.

Furthermore, you can download the dedicated UE Roll app and ‘double up’ with another Roll to produce a bigger universal sound, or use them in stereo instead, with EQ settings and an alarm function accessible through the app too.

Our one criticism is that if you plan on using it at home, its slightly forward presentation (ideal for outdoors) may become a little tiring during long listening sessions.

Something warmer and more laid back, like the Cambridge Audio Go, is better suited for tasks like this, but you won’t get the easy portability and crisp, clear midrange that you do with the Roll.

The Ultimate Ears Roll is a superb little speaker that works perfectly for its intended purpose – both in its design and performance.

It’s small enough to throw in a bag without a second thought and sturdy enough to go wherever you feel like taking it.

And most importantly, it produces a performance that’s loud and clear enough to cut through the hubbub at the park or beach with ease. For £100, we can’t imagine a better on-the-go musical companion.

Read all our Ultimate Ears news and reviews