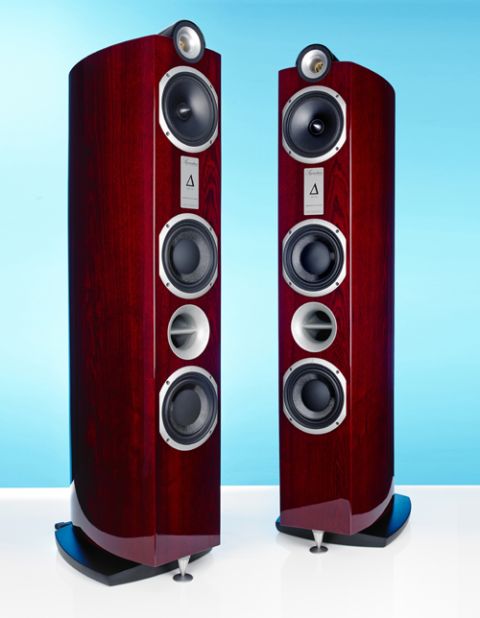 If you value excitement and entertainment, these Triangles should be at the top of your shortlist

We’ve always had a soft spot for Triangle’s speakers. This French company may not always turn out the best-balanced products, but it invariably comes up with speakers that entertain – for us, that’s priceless.

While Triangle is no stranger to turning out talented sub-£1000 speakers, we think it really starts to shine at higher price levels.

The company’s more affordable products – such as those form the Colors range – are competitive, but have tended to be slightly uneven performers; Triangle has always optimised for excitement over refinement and tonal purity.

Move towards the upper end of the company’s output and the trade-off become less marked.

We’re big fans of Triangle’s high-end Magellan range, and we’re pleased to report that pretty much everything we liked about it is apparent in these new, more affordable floorstanders.

The Signature Deltas are certainly not cheap, but they do offer a level of performance well beyond what we would expect from their price tag.

In terms of engineering, there’s little here to surprise anyone familiar with the brand. The Signature Delta is a 3-way design that uses twin 18.5-cm glass fibre bass drivers.

Move up the frequency range and we notice the Triangle sticks to a damped paper cone for the midrange.

While many rivals have long since moved away from paper as a cone material to more high tech alternatives, Triangle has stayed faithful, pointing towards the material’s balance between rigidity, low weight and decent internal damping.

Every cone material is a compromise of one sort or another, so it’s hard to argue.

The drive unit array is completed by one of Triangle’s trademark horn-loaded aluminium dome tweeters.

The idea is to improve efficiency – something Triangle is big on – while keeping distortion low and controlling direction.

Build quality is good. The cabinet is made of seven thin layers of high-density fibreboard, curved to produce what we think is quite an elegant shape.

It’s finished in one of three high-gloss options: the mahogany of our review sample looks good but there are white and black alternatives too.

In the past, we’ve found that Triangle doesn’t tend to lavish as much attention on some of the cosmetics, and that’s the case here.

The front firing port is made of plastic (which is nothing unusual) but looks a little cheap with it, while the spiking arrangement isn’t quite as rigid as we’d like.

The Signature Delta’s rated sensitivity is impressively high at 92dB/W/m. We certainly got very high levels from our resident Bryston BP26/4BSST2 pre/power combination without pushing too hard.

Such high sensitivity means that you should get good volume levels from relatively low power amplifiers too, just be warned that while nominal impedance is rated at 8ohms, it does dip down to 3.2 ohms at certain frequencies. This means an amplifier with good current delivery is essential.

Start listening and its clear that the Signature Deltas are entertainers of the highest order.

We start off with Hans Zimmer’s Mombasa (from the Inception soundtrack) and are stunned with the Delta’s dynamics.

These floorstanders punch hard and don’t hold back.

Yet, when necessary, they go quiet easily too, which points not only to responsive drive units but also to a well controlled cabinet that doesn’t resonate too much.

Tonally, things are mostly even, but we’ve heard more even-handed speakers at this level.

Still, they’re refined enough for all their good qualities to shine through. We love Triangles direct, hard-hitting approach to music replay.

It’s not overdone and is in stark contrast with some of the more traditional alternatives, which tend to put refinement and tonal purity first.

Stereo imaging is good rather than great. It’s not as expansive as we’ve heard, but is precise enough to avoid serious criticism.

As usual, much depends on how you position these speakers.

We had them well away from all walls, fairly wide apart with a small degree of toe-in towards the listening position.

They have a fairly narrow listening sweet spot – something to bear in mind if you tend to do serious listening with other people.

They’re tall too, so you may find lounging on a low sofa compromises the overall tonal balance a little.

We turn the volume up – all in the interest of science you understand – and are impressed by the way these speakers retain composure.

The sound doesn’t harden-up or get aggressive at the top-end in the way some of the company’s more affordable offerings can.

These Triangles are articulate and agile. They can track fast moving basslines with ease, and deliver each low frequency transient with exceptional punch and precision.

Impressed by what we hear, we move to something a subtler in the form of Johnny Cash’s version of I See A Darkness.

While the tweeter isn’t the sweetest around – certainly compared to the Beryllium domes used by Focal or the Diamond alternatives of B&W – it’s fast, insightful and well integrated.

Triangle speakers usually excel at delivering rhythms and these floorstanders are no exception.

They’re happy to charge along with the likes of Kanye West’s Yeezus, pounding out the beats with conviction.

These speakers are brilliant at conveying the momentum of a piece of music, communicating changes of pace with breathtaking ease.

Add this terrific timing ability to the strong dynamics and impressive resolution and you have speakers that are capable of standing toe-to-toe with the very best of the opposition.

Triangle may not be the first name that comes to mind when thinking about five-grand floorstanders, but on this evidence it should be.