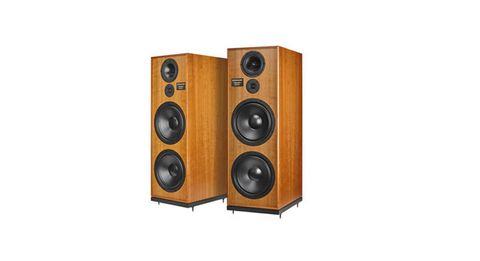 The Spendor Classic 200s are an appealing mix of retro design, unforced dynamics, subtlety and muscle

Few products that pass through our doors are as overtly retro as Spendor’s Classic 200s.

They are the new top dogs in the company’s Classic series, a range of traditional boxes that celebrate the company’s heritage and are based around the engineering ideas developed by the BBC back in the 1960s.

That doesn’t seem like a great start for a £16,000 pair of floorstanders that have to stand toe-to-toe with products from giants such as B&W and Focal - companies that specialise in pushing the technology boundaries.

It may seem a bit like bringing a stick to a gunfight but, as is far from unusual in hi-fi, things don’t turn out to be quite that simple.

Take a look at the way the Classic 200s are designed and those BBC-inspired engineering principles become obvious. The most obvious example is the thin-walled cabinet construction.

Most current speaker designs set out to have as rigid a cabinet as possible, based around the idea that if the cabinet is super-solid, it won’t vibrate and distort the output from the drive units. However, that isn’t quite what happens.

Making the cabinet rigid simply pushes up the frequency at which it vibrates, increasing the chance of this resonance falling high in the midrange where our hearing is at its most sensitive.

The BBC’s method is to use a heavily damped, thin-walled construction which accepts the cabinet will resonate and tries to move that vibration to the bass region where our ears are less bothered by it.

Give the Classic 200’s cabinet a tap and you’ll hear a low, slightly hollow thud that sounds totally different from the higher-pitched knock you hear from most modern speakers at this level.

But though the general engineering principles have remained unchanged, Spendor has worked hard to advance the BBC template where possible. The damping materials have been optimised over the years and their placement has been honed. The same applies to the drive units.

These are bang up-to-date drive units, with all the attention paid to cone and chassis behaviour we expect from a high-end product. The crossover points are set at 550Hz and 3.8kHz.

Elsewhere, it’s as if the drive towards slim and compact speakers jus didn't happen. These floorstanders are about the side of a decent cupboard, and well built with it.

Every edge lines up superbly and the high-quality veneer is applied neatly. There isn’t a huge choice of standard finishes, just dark walnut or the cherry of our review sample. Special options are available a) on request and b) at extra cost.

The large, full-length grilles are magnetically held and easy to remove, unlike the fingernail-breakers used in previous generations of Classic products. Round the back, there’s not much apart from a trio of sturdy multi-way speaker cable terminals.

These speakers have a surprisingly accommodating nature. Though large and capable of delivering plenty of deep bass, the Classic 200s don’t demand a space the size of an aircraft hanger to work well.

System matching is simple too. A high sensitivity of 89dB/W/m and relatively benign impedance characteristics means you won’t need a powerhouse amplifier to get high volume levels. Even the 50W per channel Rega Brio manages to extract decent volume.

This is a case where the quality of the partnering amplifier matters more than its output, but that doesn’t stop us from using our reference Gamut D3i/D200i pre/power combination (220W per channel) with our usual Naim NDS/555 PS music streamer and Clearaudio Innovation Wood/Cyrus Phono Signature/PSX-R2 vinyl package to get the most out of them.

Once up and running these Spendors have a friendly, easy-going balance. Don’t expect neutrality or absolute transparency - these speakers don’t deliver on either count. But they do have a distinct blend of talents that is hard to get anywhere else.

We start with Dvorak’s New World Symphony and are struck by the scale of the presentation. It’s huge, with the speakers tracking the music’s wide-ranging dynamics with gentle determination.

That formidable-looking drive unit array suggests plenty of authority and low-end reach - and that’s exactly what the 200s produce. The bass drivers render impressively powerful lows, but deliver them with a precision and agility we just aren’t expecting.

These Spendors have a pleasingly even frequency balance. It’s nicely cohesive, with no one part sticking out or seeking unwarranted attention.

While they’re not particularly analytical, this trait also makes them less fussy about recording quality. Have no fear, there’s more than enough insight here to make it quite clear when a production is poor, but the Classics will never make a meal of things.

Stereo imaging is solid and layered, with instruments precisely locked in position. However, the sound isn’t as out-of-the-box as we’ve heard. Nor is the soundstage particularly expansive.

With eyes closed, it’s relatively easy to pinpoint the position of the enclosures – that’s likely to be a side-effect of the less rigid cabinet construction.

These Spendors are happy to play at party levels, as a spin of Massive Attack’s Angel proves. We give up long before the speakers do - we’re impressed by the low distortion levels and lack of harshness, particularly at high frequencies.

There’s plenty of menace in the track, thanks to the ’200’s excellent low-end performance and strong dynamics. Their sense of composure is excellent, with no sign of stress as the piece builds to its climax.

These floorstanders have the insight to unravel the various instrumental strands, but also a lovely cohesion that prevents the track feeling that it's being dissected for inspection.

Voices come through with an unusual degree of warmth and body, without sacrificing clarity or subtlety. It’s the Spendor’s unforced yet appealing way with the midrange that really sets them apart from most of their competition. They sound effortless and natural through this region.

By the highest standards, rhythmic drive is surefooted rather than enthusiastic and there’s a rounding-off of attack, but these floorstanders are never less than an enjoyable listen. They just have a more relaxed approach to music replay than most rivals, which suits some genres of music better than others.

These Spendors aren’t for everyone. Even if their price and size aren’t issues, some won’t get along with their smooth, relatively gentle nature.

But if you’re in basic sympathy with their undemanding approach, you’ll find them hugely capable performers with a combination of dynamics, low-end articulation and refinement that’s hard to better.

Spendor’s Classic speakers tend to remain in production for decades. Having spent some time with the Classic 200s, it’s easy to understand why.

See all our Spendor reviews