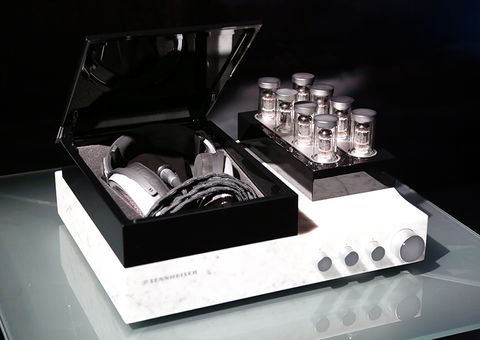 When somebody claims to have made the world’s best headphones, it’s only natural to raise an eyebrow. But what do you do when they claim to have done it twice? Two eyebrows, of course. Equal parts surprise, delight and scepticism.

The spirit of the original 1991 Project Orpheus was simple, if unashamedly hubristic: what could Sennheiser make if it did its best to ignore practicality and cost?

The snappily named Sennheiser HE90/HEV90 was the result, a reference electrostatic headphone and valve amp combination made of wood, glass and metal. Only 300 were made, and they cost £10,000 each. Calling them simply ‘headphones’ seemed something of a undersell.

Back to 2015, and Sennheiser is celebrating its 70th anniversary with the launch of another Orpheus: the HE1060/HEV1060. Development started around 10 years ago, and it’s a formidable successor with a price tag to match.

How much? It costs €50,000. Which roughly translates to £35,700. As far as we're aware, the world’s most expensive pair of headphones. Can a headphone system ever justify that price? Let’s find out.

We spent a frustratingly brief period of time locked in a small room with the new Orpheus, which was connected to a T+A MP 3000 HV media player. Here are our initial impressions.

Eyes-on before hands-on, and the first thing your gaze settles on is the copious amount of marble that makes up the bulk of the chassis. To be precise, this is fine Carrara marble of the type Michelangelo once used for his sculptures. Axel Grell, one of the engineers in charge of the project, went to Italy to personally pick the right marble. Money no object, remember.

Sennheiser takes this opportunity to say things like ‘reshaping excellence’ and ‘a monument to sound’. Appropriate rock-themed phrases for sure, but the real reason for the marble is its mass, purity and solidity – which is good for damping. Sennheiser calls it ‘a vault of silence’.

Inside, we are told, the Orpheus uses the ESS SABRE ES9010 chip for digital-to-analogue conversion. There are eight internal DACs, with four parallel channels per ear, promising to reduce distortion and noise levels. They are capable of handling high-resolution audio up to 32bit/384kHz (as well as 2.8/5.6 MHz DSD signals). Connections: balanced and unbalanced, plus digital optical, coaxial and USB inputs.

We are invited to power-up the system, and a light blinks to life. Motorised knobs protrude from the front. Eight valves rise out of the top and glow invitingly. The lid yawns, revealing the treasure within. ‘Switching it on’ really doesn’t describe it. It’s more of an event. A ceremony. It’s hard to watch the Orpheus transform without imagining a drum roll.

The design may not appeal to everyone but it’s hard not to be impressed by the build quality. Every machine should aspire to this the kind of solidity and luxury. We’ve seen some fancy headphones in our time, but rarely (if ever) has anything reached this level of lushness.

It’s the sort of pleasure that only comes from stepping onto a red carpet at a film premiere, driving a Rolls-Royce or getting unexpectedly upgraded to First Class on a transatlantic flight.

We have no expectations for ‘chromium-plated brass’ but these knobs are certainly a pleasure to operate. They’re solid and they turn smoothly, with just the right balance of give and resistance. We nearly let out a satisfied 'ooooh' just changing the volume.

And that’s before we get to the headphones themselves – beautifully sculpted aluminium, with a side helping of leather and fine microfibre cloth.

The ear cups are surely capacious enough to engulf even the largest ears, and they hug the sides of your head rather than squeezing. We could wear these for hours on end.

We’re not sure what a pair of £35,700 headphones is supposed to feel like, but we certainly have no arguments with these.

Before we get into listening, let’s talk of the madness that’s gone into the headphones themselves. There are 2.4-micrometre thick, platinum-coated diaphragms, which Sennheiser says is the ideal material and size for control.

The Orpheus has an ultra-wide frequency range, from 8Hz to more than 100kHz. This far exceeds what any human can hear. You would need the combined hearing capabilities of bats and elephants to perceive all of that.

Why? As with everything about the Orpheus, the answer is ‘because they can’. But Sennheiser also says an extremely wide frequency response helps ensure the sound is virtually free of audible distortion.

Eliminating distortion seems, to us, to have been the central theme of Sennheiser’s strategy with the Orpheus. It is the reason the transistor power amp has been built directly into the cups of the headphones: to minimise losses inherent in long cable runs and reduce distortion.

Does it work? Oh yes. Very much so. When we finally tire of playing with the Orpheus’ transforming bits and get listening, we are treated to a tremendous performance.

Of course, that is entirely the point. But even with our short playing time, even with the sound of people’s chatter in the background (these are open-backed headphones), we must conclude the sound is jaw-droppingly good.

Sennheiser can’t talk about the Orpheus without using the word ‘emotion’, but we think the key word here is ‘authenticity’. Music sounds entirely natural, not processed or exaggerated or equalised.

The emphasis on eliminating distortion has paid off. What you get is effortless insight. The subtlest details are eloquently presented and made so abundently clear that you wonder how you’d never noticed them before. This is the aural equivalent to getting your windscreen power-washed.

It’s not just the textures that benefit, but also the overall presentation. Instrument separation is handled with skill. Play anything with an orchestra and it becomes apparent how the Orpheus makes the most of the space between performers.

Clarity alone is not enough, of course, and the Orpheus also appears to excel at control. Timing is taut as you like. Leading and trailing edges start and end exactly where they should. This is where one might say ‘military precision’, but that would be an injustice: what the Orpheus offers is more human – more emotional – than that.

Across the frequency range, the weight is just right. There’s the power and energy you’d expect from a live performance. Vocals and guitar strums sound fresh - we can’t think of a better way to describe their directness and their organic feel, which is entirely convincing. It’s the sort of impact and immediacy you’d expect from performers sitting in the same room.

Can a pair of headphones ever justify £35,000? Probably not if you have to ask, as the saying goes. We’re not actually sure Sennheiser even has an audience in mind, because in a way, this isn’t for the public.

The new Orpheus is for Sennheiser to see what it can do, and it's impossible not to acknowledge the boundaries that the new Orpheus pushes even if we might not be able to conceive of ever buying a pair.

Should you be excited about this? Yes, in the same way that one is excited about a new rocket-powered car breaking the land speed record. What’s more exciting, however, are the possibilities created by such a project, as this high-end tech will no doubt (slowly) trickle down to consumer products.

Either way, the Sennheiser Orpheus is a staggering piece of engineering, and an amazing slice of audio heaven. Now can we listen to it some more?

See all our Sennheiser news and reviews