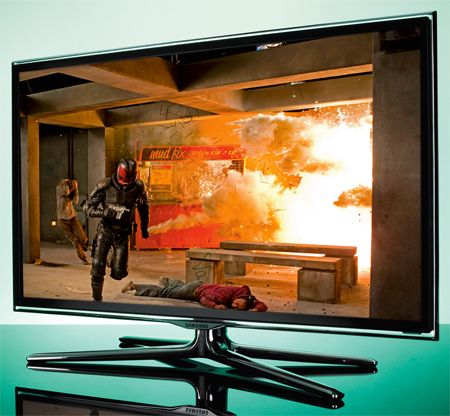 A great set with great features, but faces tough competition

We've tested the 40in and 46in versions of the Samsung ES6800 range, and this 32in screen continues the tradition of stylish Samsung TVs. With its slim-bezelled frame perched atop the shiny metal stand, the Samsung UE32ES6800 is a good-looking TV.

But it's not all style and no substance, though, as Samsung has packed in
plenty of features. BBC iPlayer is now standard spec for most TVs offering online content but, like the ES5500, Samsung raises the stakes by now also offering ITV Player.

Samsung UE32ES6800B: Tech specs
Along with the usual on-demand services and social media apps, the built-in DLNA and three USB ports let you access photos, videos and music files stored on various devices and share them on your screen.

The UE32ES6800 includes a Freesat tuner along with a Freeview HD tuner. This is great news, as Freesat channels are arguably crisper than their Freeview counterparts. It's also an active 3D set, with two pairs of lightweight glasses included.

The cheaper ES5500 had a few noise issues, but the image on this set is much cleaner. A hint still lingers though, which is why we ventured into the settings panel and switched the Digital Noise Filter on to the 'Low' setting.

Displaying the Blu-ray of Mission: Impossible - Ghost Protocol, the Samsung blazes through the film with vibrant colours, sharp edges and rich contrast.

Motion handling is on par with Panasonic's TX-L32E5B: decently stable with minimal blurring, but still not as silky-smooth as the Sony KDL-32HX753.

As a contrast to the Panasonics' warm tint, the Samsung has a slightly blue cast - the preference for either bias is up to individual taste, but neither has the Sony's natural balance.

In fact, next to the Sony, the Samsung looks positively glossy and colourful. But after prolonged viewing, and although that impressive contrast makes for a dynamic picture, the black levels are understated, undermining subtle colour variations.

Colours can veer towards being overblown at times too, despite delving into the adjustment menus.

There's no denying the detail on offer from the picture (it's certainly better than the E5500), but when this set is put next to the Panasonic L32ET5B and the Sony KDL-32HX753, some of the finer textures are lost in shadows and strong colours.

Ergonomically, the Samsung interface is a breeze to use - it's one of the best - and the programme guide offers a welcome picture-in-picture view of the action.

Sound-wise, it's as you'd expect from a flatscreen: little in the way of punch or body, but not totally dismal.

But despite putting in a strong effort, it doesn't quite lead the pack when it comes to outright picture performance.