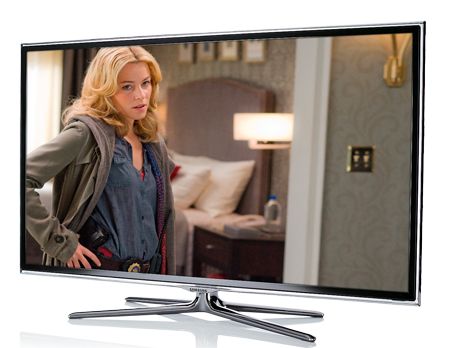 This is the first of Samsung’s ES6800 range we’ve tested, and visually it’s more than a little reminiscent of last year’s D7000 range.

That’s not a criticism, by the way – the Samsung UE40ES6800 is a handsome, slim-bezelled device, and the claw-like stand remains a worthwhile design flourish.

There’s little to complain about where the spec’s concerned, either: Freeview HD and Freesat tuners, integrated wi-fi, and active-shutter 3D (with a couple of pairs of lightweight glasses thrown in) are among the highlights.

And there are more input sockets of various types than any rational user will need.

There’s a lot to admire in the way the Samsung UE40ES6800 performs. 3D images from Cave of Forgotten Dreams are stable and enjoyably deep, with motion handled securely, while 2D Blu-ray pictures are detailed, high-contrast and convincing. Skin-tones are life-like, and the colour palette is extensive.

Some of the UE40ES6800’s composure deserts it when upscaling DVD – motion is
a little less certain, and picture-noise is the rule rather than the exception – but switch to one of the high-def tuners and it smartens up its act.

Samsung UE40ES6800: Freesat & Freeview HDWe found that Freesat reception offered a little more depth and detail to black tones, but those without a dish are more than adequately catered for by the Freeview HD alternative.

Gamers will enjoy the Samsung’s swift and positive responses, even if the necessary lack of motion processing can make swift movement a touch smeary. And sound is mercifully unstressed throughout (if entirely absent below the midrange).

But as long as you examine your example’s backlight before handing over the readies, you’ll be in possession of a very capable TV.