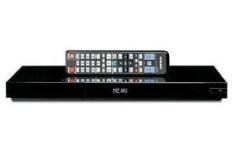 Anyone who expected the first commercially available Blu-ray player to be vastly expensive would have been surprised when it turned out to be the £349 Samsung.

What's more, in the five short months since we saw it, it's dropped almost 25 per cent to £265. Apply those sorts of discounts to the tellies, and we could all be going 3D sooner than imagined.

The Samsung is undeniably one of the most flashy-looking players we've seen, with its touch-sensitive buttons and a blue-lit window to our frantically spinning disc, but it's not exactly sophisticated, and feels a little flimsy next to some.

In terms of specification, the BD-C6900 gets a silver star for its 7.1-analogue output (you need a second HDMI for a gold star), but has it immediately ripped back off because the levels for each speaker can't be adjusted, making the feature close to pointless.

The built-in wi-fi adapter is a reservation-free feature though, and, along with the ethernet connection, allows easy access to services like LoveFilm and BBC iPlayer via Samsung's Internet@TV portal.

Cloudy… lacks a silver lining
With such limited 3D content available, you're going to be watching plenty of standard Blu-rays, especially in the short term, so it's good news that the Samsung is capable of producing a very good 2D image.

True, there's a touch of smear to some of Harry Potter and the Order of the Phoenix's slow panning shots, but the punch and vibrancy of its colours combine with excellent detail recovery to produce an overall picture that's eminently enjoyable.

Pop one of the few 3D discs available into the drive, and the 'C6900 demonstrates a pleasingly fast load-time. Unfortunately, while there are impressive degrees of depth to its reproduction of Cloudy with a Chance of Meatballs, it looks a little too much like a series of flat, overlaid images, rather than a rounded, solid whole.

It's certainly not the only player to lack a bit of believability, though, and the vivid but balanced colours prove to be a bonus once more.

Top of the class with DVD
Where the Samsung is right at the top of the class is with DVD, as it manages to upscale the brilliant Sherlock Holmes with excellent detail, sharpness and control.

This sonic performance favours solidity over outright precision and detail, but it remains expressive enough to offer reasonably emotive dialogue as well as big explosions.

So, all-in-all Samsung has produced an accomplished all-rounder that's now at a very good price. Thing is, there are even cheaper – and better – rivals available.