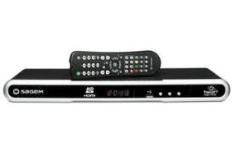 Bridges the gap between the single-tuner Technisat HDFS and the Humax Foxsat-HDR: a capable if unspectacular buy

Compared to the sturdy allure of the Humax Foxsat-HDR, the DTR94250S is no oil painting, although it's usefully sleek at just over 4cm tall.

The simple numeric display is fine, but not a patch on the classier screens fitted to the Humax and TechniSat HDFS, not least because it's far less intuitive: would you rather read '108' on your display, or 'BBC HD'? Exactly.

However, the Sagem has everything you need, such as twin Scarts, component video sockets (not fitted to most Freesat boxes) and, of course, an HDMI out.

A coaxial digital out flanks analogue RCA outs, and there's also an ethernet socket which will hopefully support BBC's iPlayer in the months to come, although there's not yet been any announcement to that effect from Sagem.

Similarly, the USB input has to remain, for now, underused: it's fitted for future expansion, according to the manual, which suggests (we'd hope) provision for replay of various media file formats.

Other useful features? We like the adjustable timer margin – you can choose to automatically add five, 10 or 15 minutes to the start and ending of any recording, just to be sure you capture the whole show.

Excellent HD performance
Performance is fine, and picture quality with BBC HD is obviously the main event: colours are vibrant, dark areas of screen are dense and consistent and, while there's a shimmer of noise on some fast motion, it's not problematic.

True, the Humax Foxsat-HDR has the quality edge, but it costs more: relative to its rivals, the Sagem's up to scratch with HD, and its standard-definition images appear consistently good too.

This is, however, another PVR to fall foul of our scaler grumbles: there's no 'auto-bypass' mode, so if you set it to 1080i to view native 1080i HD, you're forced to use the Sagem's upscaling for standard-definition, too.

Any other issues? The DTR94250S's menu and guide buttons on the remote control are way too small: in fact, the whole remote handset comes over as a cast-off from a cheap DVD player, rather than something intuitive you'd want to live with on a daily basis.

But that's about the size of our muttering. The Sagem has to drop a star because, thanks to its new-found iPlayer support, the Humax Foxsat-HDR's improved value (and its already-intact performance advantage) means the DTR94250S is no longer so appealing – but it remains a decent-enough buy.