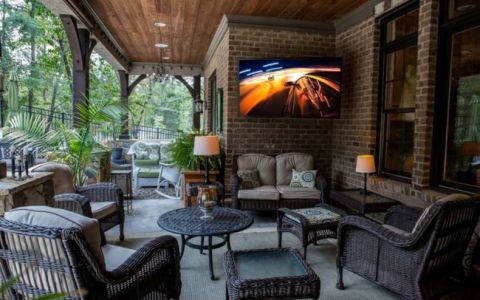 The very best TVs you can buy today might look fantastic in your front room, but as soon as you take them outside, their contrast and picture quality is going to suffer.

If you had hopes of al-fresco film nights, or watching sports in the sun, a specialist outdoor TV is what you need to consider, and the SunBriteTV 55in Veranda (SB-V-55-4KHDR-BL) is one of the best we’ve seen.

Considering it throws 4K resolution with HDR support into a weatherproof package that can withstand rain, dust, temperature extremes and even bugs, there’s no wonder the Veranda has a pretty high price tag. But if you want to invest in a TV that’ll last, and do the job well, this is certainly one to consider.

As an outdoors TV, the Veranda is not going to win any awards for design. Instead of focusing on aesthetics, it focuses on protection, so it’s built like a tank. Forget lightweight plastics and fancy finishes, this set is all about powder-coated aluminium and bolted cabinets, with no vents to let in stuff you’d rather it didn’t.

That kind of metal construction makes for a pretty heavy TV, weighing in at 47 pounds. Despite its heft, it still manages to look pretty good, and it’s not overly thick either.

It can be used in highs of up to 104 degrees Fahrenheit all the way down to subzero temps of minus 24 degrees.

Really, this set is intended for wall mounting, and is compatible with 400mm VESA brackets – SunBriteTV offers a range of weatherproof options from around $139. You can go for the optional stand instead if you prefer, which is sold separately for around $105 and is made of black heavy-gauge aluminium, to match the TV.

Making a TV weatherproof while allowing access for ports is no mean feat, but the Veranda manages to offer it in a neat solution.

The connector panel is locked behind a heavy metal door that secures with three thumb screws. Along the bottom of the door is a gap protected by a thick foam-rubber gasket, which moulds to the shape of cables passing through and keeps the ports protected.

We’re impressed with the port selection, which comprises three HDMI ports (including one with ARC), one each of component and composite video inputs, and even a VGA port.

A single USB 3.0 port is present and correct for digital media, plus there’s an RF connector that lets you attach an antenna for over-the-air channels.

Perhaps the only downside to all of this is that there is no smart functionality with this TV, despite the presence of an ethernet port, which is there for IP-based control only.

You can of course add a streaming stick via HDMI, such as a Google Chromecast or Amazon Fire TV Stick 4K to smarten it up a bit.

Just like the TV, the Veranda’s remote has to be weatherproof, so it sports a sealed plastic layer over the top of about 50 different buttons, controlling everything from input to media playback. SunBriteTV has used this style remote control for a couple of years now, but if it ain’t broke...

Being an outdoor TV, the Veranda comes with a few expected limitations when it comes to picture quality.

For a start, the Veranda is optimized for shaded installations (its Signature series is the option for partial sunlight viewing), such as a deck or covered cabana. Still, with so much ambient light still around, the display packs in a direct LED backlight with the brightness turned up high.

This full array backlight doesn’t have any local dimming, which means it lacks the control in scenes where there’s a lot of brightness to contend with.

A street scene in Spider-Man: Homecoming shows Peter Parker on a fire escape at sunset, and on the Veranda, the entire scene is overwhelmed by the setting sun. Where it should have rich colors and discernible details, the image is largely blown out.

The Veranda produces the bright image across the entire display, but it still struggles to compete in terms of HDR.

Watching a scene from Blade Runner 2049, the contrast of bright lights in a dark casino isn't as stark as expected, and brightly lit shots show some inconsistent shadows along the outside edges of the panel.

Fast action is a little choppy too, despite the 60Hz refresh rate. Quick-moving objects and people – such as Spider-Man swinging through Queens – have significant smearing, as if a cloud of video artefacts is following him as he does.

Color quality also leaves us wanting. Pinks, reds and blues are all a bit oversaturated, which makes it difficult to tell the difference between more subtle hues. It’s not unexpected in this kind of TV though, and is better than we’ve seen in other outdoor models.

That goes for viewing angles, too – while they’re far from stellar, you have to give outdoor TVs a little more slack in this respect. Even so, have more than three or so people around this TV, and some are going to be seeing colors that are a bit off.

If you were hoping for some outdoors gaming action, we are pleased to see support, not only for 4K gaming, but also for 10-bit color and HDR in both apps and games.

It also supports a range of different frame rates (including 24Hz, 50Hz, 60Hz), which will be great for anyone using a game console as their primary streaming source.

The only downside? Input lag. The Veranda comes in at 73ms, which is a lot, lot slower than we would usually recommend for gaming and can result in a sluggish and frustrating gaming experience.

The SunBrite Veranda’s built-in speakers are pretty decent, and may well be all you need to enjoy watching TV outside.

It features two 20-watt speakers, which offer decent volume, clarity and bass. Previous models of this TV have struggled with sounding a bit muffled through the sealed cabinet, but SunBriteTV seems to have address that here.

You can choose to pay extra for a set of all-weather speakers or soundbar from SunBriteTV, and if you do, the Veranda TV also has a built-in 20-watt amp to power them.

The SunBriteTV Veranda is an outdoor TV that is wholly built to purpose, offering outstanding build quality, weatherproof design and good sound. And, while the picture quality is a long way short of that offered by the best indoor TVs, outdoor TVs have a whole different set of challenged and have to be rated differently. In its class, this is actually one of the best performers around.

It’s a shame there is no smart functionality, but it’s relatively cheap to add that yourself.

Compared with past models, including the SunBriteTV Signature Series and its big competitors, the new SunBriteTV Veranda is the best outdoor TV we've seen.