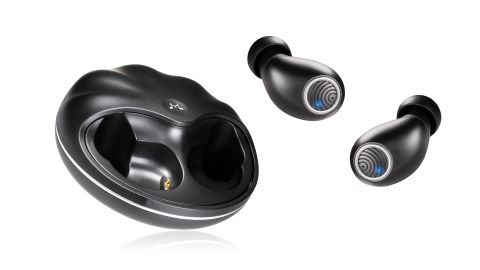 A likeable, expansive soundscape and one of the most comfortable designs we’ve tested, but competition at this level is tough indeed

SoundMagic is a brand yet to reach its 20th birthday, but to overlook its excellent budget headphones owing to relative youth would be a gross error – its E10 (and E11) wired in-ears are easily one of the most successful products we’ve seen in the past decade.

Any dedicated headphone company must look to embrace the burgeoning true wireless market and, staying true to its affordable heritage, SoundMagic’s debut pair comes in at well under £100. Can the SoundMagic TWS50 true wireless in-ears match the sonic chops of its wired forefathers?

Weighing just 4g apiece, the buds are beautifully light. The pleasingly tactile multifunction button feels and looks like a magnified fingerprint. It’s also the kind of button that only needs to be covered by your finger, not physically depressed, so you won’t find yourself forcing the buds further into your ear canal when trying to pause and play tracks.

‘Trying’ is the operative word though. We attempt to skip a track forward or back by double-tapping one of the buttons, but succeed only in altering the volume or pausing and restarting a track, despite hearing a reassuring tone that tells us the button has registered our touch.

It feels counterintuitive to touch the left button to increase the volume or skip forward a track while using the right earbud to go back to the previous track. It doesn’t take us long to adjust to doing it this way around, but it is a while before these commands become second nature. Over the course of our listening, we find ourselves grabbing our phone to avoid them.

In addition to the headphones’ pre-fitted medium tips, just two other sizes have been provided, which doesn’t seem enough. That said, the ergonomic, teardrop design (within which lies a 6mm Neodymium driver) feels nicely weighted, hugging our ear and never feeling as if it could fall out.

A secure fit during use may seem like a basic requirement for a pair of true wireless in-ears, but many models have fallen at this first hurdle. Refreshingly, the TWS50s are really comfortable. And they fit well.

SoundMagic has chosen to offer something a bit different with its charging case: think high-end yoyo meets rotary telephone dial, where holding the bottom half and rotating the top eventually reveals the nesting buds. A nice touch here is a numerical battery indicator, which shines out from the case for a few seconds when it registers the buds’ presence.

A reading of 100 means the TWS50s are fully charged, although sadly on our sample, one of the elements on the display is a little dull, meaning a reading of 99 per cent looks more like 59.

While the overall case design is different from the swathes of simpler, flip-top options around, it’s a bit fiddly. You can’t open this case with one hand. It does smack of reinventing the wheel somewhat.

The TWS50 uses a micro-USB charging port. There’s also Bluetooth 5.0 and an IPX7 rating, which means the headphones can withstand being submerged in up to 1m of water for around half an hour.

The big claim here is that with a fully-charged case, you’ll get up to 30 hours of use before needing another external power source. This means the case holds roughly four extra charges – a competitive proposition for the money.

The TWS50s also offer the option of listening in mono, on just one headphone, should you wish. It’s perhaps useful if you want to hear your surroundings (there’s no ANC onboard) or conserve the battery.

There’s no accompanying app for the SoundMagic TWS50 headphones and, thus, no scope for altering EQ levels, but we wouldn’t necessarily expect that in a sub-£100 pair of true wireless headphones. The Award-winning Cambridge Audio Melomania 1 in-ears, for example, don’t offer this despite costing £20 more.

We cue up FKA Twigs’ 2014 debut album LP1 on Tidal and our initial reaction is that there’s an awful lot to like. Solo voices in Preface are full-bodied and their ethereal choral accompaniment is presented within a detailed, expansive, layered mix. Computer-generated blips flash from left ear to right and even from overhead to just below our left shoulder.

The album continues to Lights On and the musical presentation is remarkably open and spacious, with each instrument given ample space to hit its mark. It’s only during the track Two Weeks that we become aware of a minor shortfall.

Here, an initial, rhythmic riff through the bass registers is actually a heavily altered vocal, but the sounds aren’t fully recognisable as words here. We listen to the same track on our control headphones in this test, the Cambridge Audio Melomania 1s, and find that they dig up a little more detail through the low end, making the bassline more grippy and textured, revealing the extra edges that make the sounds recognisable as speech.

Throughout Foals’ 2008 album Antidotes, also on Tidal, vocals are central and well handled and the treble is exciting, but the minor shortfall in dynamic detail remains, especially through the lower frequencies. It’s a small issue, something we notice in direct comparison with the Cambridge Audios rather than in isolation, but it’s there.

There’s plenty of separation, but in terms of timing, the TWS50s are a shade off excellent too. Throughout The French Open, we lose a modicum of the frenzied bassline that underpins the track and draws all the musical strands together.

As a direct comparison, the SoundMagic TWS50s are £20 more expensive than the recently reviewed Cyrus soundBuds. In terms of sonic breadth, fit and battery life, SoundMagic’s inaugural true wireless in-ears offer a step up in performance over the Cyrus product.

The Melomania 1s, meanwhile, are the current What Hi-Fi? Award-winners. Pricier than the TWS50s, they present a significant step up again, particularly for detail and timing.

SoundMagic has released a pair of true wireless in-ears that offer decent sound-per-pound value. If this is the extent of your budget, you’ll get a competitive battery life, one of the lightest and most comfortable earbuds we’ve tested to date and an expansive listen that betters the cheaper Cyrus soundBuds.

However, for just a little extra outlay you could own the Award-winning Cambridge Audio Melomania 1s – and their claim to the throne has yet to be seriously challenged.