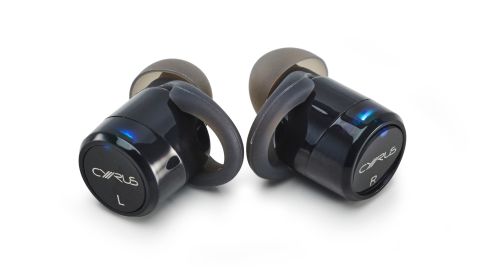 A decent listen, provided you don’t expect Cyrus’s audiophile-grade audio at this level

We’ve come to expect a lot from true wireless headphones – even at the budget end of the scale. Stiff competition between brands has pushed battery life, driver standards, sound quality and the features lists ever skyward, while at the same time driven case sizes, charging times and prices down.

So can British firm Cyrus, whose hits include two 2019 What Hi-Fi? Award-winners (the Cyrus soundKey DAC and CDi CD player), blow us away with a pair of true wireless soundBuds costing just £59?

We’re certainly not blown away by the soundBuds’ battery life. They can only muster a disappointing three hours of playtime, plus four extra charges from the case.

This brings us to 15 hours in total – hardly groundbreaking when our current favourite budget wireless buds, the Cambridge Audio Melomania 1s, can go for nine hours before needing to be placed in their case for their first charge of four.

In terms of fit, however, we’re pleasantly surprised. Three sizes of fin and tip are supplied, of which, the pre-fitted medium fin and bud provide a decent, secure fit and seal.

However, the fin and tip components are attached together, so you can’t select a large fin and a small tip, for example.

As such, it’s a shame more size options aren’t supplied.

Whether these soundBuds actually constitute a ‘sports earbud’ fit, as Cyrus claims, will depend on the size of your ear or how heavily you’re working out.

We hit the pavement for a run and find them less secure than the Jaybird Vistas, but a far better fit over 5K than the Melomania 1s, which don’t feature extra fins. Of course, Cambridge Audio doesn't claim that the Melomanias are actually intended for sporting use.

The overall build quality of the soundBuds is more functional than premium. The buds are small, light, and the circular button (the entire top surface of the unit itself) performs pause, track-skip and call-handling well, although you have to press quite hard on them. It’s a shame you can’t alter volume using these buttons – you have to dig out your phone to do it – but it’s a small gripe at this level.

The little flip-top case is pleasantly small, has a useful LED display for battery life and is thoroughly pocket-friendly. It might not take kindly to being dropped from a great height, so Cyrus has supplied a little velour bag, which is a nice touch at this price point. The soundBuds are also IPX5 rated, meaning that they should withstand a sweaty spin class at the very least.

Bluetooth pairing is easy, helped along by in-ear voice prompts, and once achieved, connection is strong throughout our tests. There’s no app support and no active noise cancellation onboard, but the mic works well during calls and when we ask Siri for a weather forecast. All in all, it’s a fuss free approach.

As we cue up Stormzy’s Wiley Flow on Tidal, the initial synth is tonally balanced and there’s good separation of each musical strand as Stormzy pre-empts the grimy bass riff.

The album continues and, although the soundBuds are ticking along nicely, it is at the expense of a weighty, exciting bass. The soundBuds undercook things slightly here, coming off a little lightweight through the low end.

We listen to Aerosmith’s 1989 Pump album, also on Tidal. As the electric bass kicks in at the start of F.I.N.E, Steven Tyler’s vocal zips along, focused centrally in a cohesive mix.

The various conversations at the start of Going Down/Love in an Elevator are open, agile and clear, but we’re missing an extra dollop of dynamic build and excitement as the rhythm section of the song proper begins.

We switch to The Streets’ Fit But You Know It and while it’s a decent, relatively transparent listen, the difference in dynamics and bass depth are laid bare. It’s less exciting and entertaining than our comparison set, albeit at a more affordable price.

If we anticipated the audiophile sound quality that we’ve come to expect from the Cyrus brand, we didn’t quite find it in the soundBuds. At this level though, that’s no surprise at all.

These entry-level true wireless headphones can’t boast exceptional dynamics and detail, but they do offer a decent listen and represent solid value for money. That makes them well worth considering if you're looking to go true wireless on a budget.