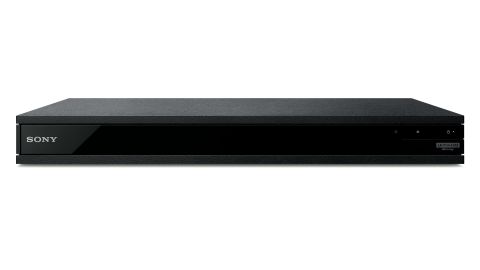 Sony’s dedication to 4K Blu-ray results in another fine player for the money, despite a couple of peculiar traits

With more and more people seemingly content to fire up their favourite 4K video streaming service, you’d be forgiven for thinking that disc formats are an endangered tech species.

But given the amount of 4K content now available at your fingertips through TV apps, does the world still need a physical 4K format? Even Samsung has given up the ghost and stopped its Blu-ray player production.

Sony’s answer appears to be a definitive yes. After all, the Japanese giant is one of the founding fathers of the original Blu-ray format and still offers a range of 4K Blu-ray players in its current AV line-up, including its latest deck, the UBP-X800M2.

We have big hopes for this machine. It succeeds the original UBP-X800, a deck we awarded five stars back in 2017. The new model has been buffed and tweaked under the hood rather than being completely overhauled, but if we’ve learned anything about Sony’s Blu-ray players over the years, it’s that they’re usually highly competitive, if not class-leading, especially at around this £350 ($500) price point.

The UBP-X800M2 sits a couple of rungs up from what we’d call budget, though, and its main rival is the Award-winning Panasonic DP-UB820EB. It’s a little slimmer than the Panasonic, but still weighty thanks to Sony’s frame and beam chassis design which aims to increase rigidity and minimise the effects of external vibrations.

It’s a minimalist-looking deck too, designed to hook up with and complement Sony’s Award-winning STR-DN1080 AV receiver. The fascia is clean, apart from power and eject buttons on the right. The loading draw is tucked away behind a large section of the front panel which drops down. It’s slightly strange that there’s no display on the player, though.

Around the rear of the deck is a familiar arrangement of video and audio outputs. Again, they’re kept to a minimum. There are twin HDMI outputs that can be used to split audio and video so you’re feeding the purest signals into your display device and AV home cinema amplifier. There’s also a coaxial digital output and an ethernet for wired internet connection and for accessing the player’s built-in streaming services (dual-band wi-fi is also included).

Look closely and you’ll see a small Bluetooth logo. That’s right, you can actually stream audio from the player to a pair of headphones. It’s useful for late-night viewing and we don’t suffer any lip-sync issues when using the feature during testing.

As part of its smart suite, the UBP-X800M2 comes with the three major video streaming services: YouTube, Netflix (with a dedicated button on the remote) and Amazon Prime Video. There is 4K HDR support where available, although the Sony doesn’t support Dolby Atmos over Netflix or Dolby Vision via Amazon Prime Video.

The Sony also doesn’t cater for HDR10+, which is a little disappointing when rival machines such as the Panasonic DP-UB820EB tick all the major HDR boxes. It’s a shame given the admirable way Sony continues to stand by and support niche audio formats such as DVD-Audio and SACD, which are both supported by the UBP-X800M2.

We’re also confused and a little frustrated by the way Sony has seen fit to implement the player’s Dolby Vision support. Like the more expensive Sony UBP-X1100ES, instead of automatically switching between HDR10 and Dolby Vision depending on the content you’re playing (as with the Panasonic), you have to enable and disable Dolby Vision through the player’s menus.

It’s particularly long-winded and slightly unintuitive, especially since having it enabled automatically triggers your TV’s Dolby Vision picture mode when you’re watching a disc that’s only in HDR10.

As with the X1100ES, the X800M2 also includes HDR to SDR conversion, although we doubt you’d be buying this player to use with a non-HDR-supporting 4K TV. It comes in more useful when the player is used with a projector, many of which don’t support HDR standards.

In operation, the Sony is as quick and slick as anything we’ve tested in 2019. Discs load quickly and the player responds to button presses on its small, palm-sized remote without any hesitation.

We fire up the Sony and slip in the 4K Blu-ray of Spider-Man: Homecoming, where we’re greeted by a crisp picture with plenty of detail and insight. When things take a turn for the worst aboard the Staten Island ferry, the Sony shows great composure as the fast-paced action unfurls.

As Vulture hovers over the ferry, attempting to take down Spidey with his high-tech weaponry, the Sony keeps motion stable and composed. As Vulture’s weapon malfunctions, the bursts of bright light are punchy and vibrant. The Panasonic DP-UB820EB appears to deliver them with slightly greater intensity, but there’s not a huge amount in it.

It’s a similar case with colours, as the Sony opts for a more reserved, neutral approach, while the Panasonic goes for greater vibrancy and a slightly more film-like quality which emphasises depth and which some might find slightly more immersive.

With standard 1080p Blu-rays, the Sony’s balance and composure shine through once again. Of course, the picture quality does rest on the quality of the disc put its way. It can’t do much to alleviate the noise from the Transformers film, but it does a fine job with Fantastic Beasts And Where To Find Them, with great attention paid to the texture and detail of Newt Scamander’s smart attire.

We’ve come to expect great sound from Sony’s 4K Blu-ray players, and the UBP-X800M2 doesn’t let us down. It’s wonderfully musical by the standards of this price. It displays an even more fleet-footed and rhythmical approach to the score of Fantastic Beasts than the Panasonic DP-UB820.

There’s dynamics and detail in spades during the amusing bank scene near the beginning of the film. Strings sound sweet and natural, with plenty of sparkle through the percussion. Dialogue is clear, natural and convincing – the player delivers Newt’s softly spoken manner with great subtlety which other rivals find hard to do.

As the Obscurus starts to tear through the city, the Sony’s impressive dynamic ability comes to the fore, the score and the scene explode into life with soaring highs and crashing lows delivered with immense verve and vigour. For this money, this deck is a real entertainer.

The UBP-X800M2 is the latest in a successful line of 4K Blu-ray players from Sony. Picture quality is up there with the best and it’s one of the most sonically gifted decks we’ve heard around this money too.

The lack of HDR10+ support will frustrate a few potential owners and the implementation of Dolby Vision seems overly complicated, but it still delivers a 4K performance worth investigating.