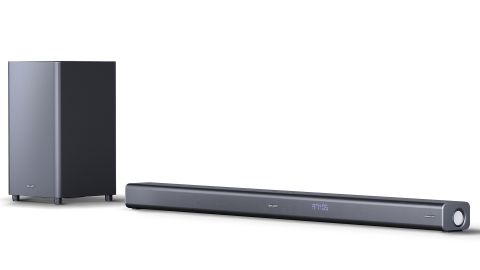 The Sharp HT-SBW800 isn’t the worst soundbar we’ve ever heard, but its impressive spec sheet belies a below average sonic performance

There are loads of ways to make your soundbar stand out from the crowd, not least by including technologies such as Dolby Atmos, but increasing the size and dimensions are one sure way to make sure your bar will get noticed.

A glance at the Sharp HT-SBW800’s spec sheet shows you’re getting a whole lot of soundbar for less than £500. It’s simply huge – 120cm long, to be exact – and weighs 4.3kg without including the wireless subwoofer.

The size of the HT-SBW800 will immediately present a problem for many households: you’ll need either a big enough surface to lay it flat, or the tools and permission to wall-mount – even then, it will stick out further than anything smaller than a 55in TV.

But it couldn’t be much smaller and still house all the drivers and amplification necessary to make it a 570W, 5.1.2-channel Dolby Atmos soundbar.

That means four speakers firing directly at you to make up the front three channels, as well as two firing upwards and one from each end to provide spatial effects designed to fill the room like a full surround package. The spec sheet can only infer so much about the build quality, but once you lift the HT-SBW800 from the box, you'll feel how well it has been put together.

While the subwoofer is about par for the course for those bundled in with sub-grand soundbars, the main unit itself benefits hugely from its metal grille.

On feel alone, you probably wouldn’t be surprised to hear that it cost twice as much as it actually does.

That grille covers the front and crown of the unit – an LED display shines through the front telling you which source and mode you’re using – leaving a bald patch at the back where you can find an equally impressive range of connections.

There are three HDMI inputs – one of which is equipped with ARC – optical and coaxial digital ins, a 3.5mm aux jack and the option of USB playback. Add to that the HT-SBW800’s built-in Bluetooth 4.2 and there are few boxes left for Sharp to tick.

You can use your usual TV remote to control the volume, but there’s a dedicated one included that you can use to alternate between sources, as well as fiddle with the Sharp’s EQ.

You can boost and reduce treble and bass levels, and there are four pre-set sound modes: Movie, Music, News and Night. You can also turn off surround effects to have the HT-SBW800 focus all its efforts on projecting towards the listening position.

But if this soundbar’s build and features belie its rather reasonable pricing, its sonic performance will unfortunately set things straight.

There are a few positives: balance is good, with no real hard edges to the treble and, while the sub delivers rather woolly and ill-defined bass, it does at least do a reasonable job at blending with the main unit. Designing a decent subwoofer at this price is extremely difficult, so the fact that the Sharp doesn’t try to commandeer the balance here is welcome.

Those four forward-facing drivers on the main unit work hard, meaning you get sound projected towards you with more focus than is possible from the majority of modern TVs.

The spatial effects coming from the side and up-firing speakers are less convincing, but certainly it isn’t the worst we’ve heard from a budget Atmos-stamped soundbar.

But it is all hampered by a disappointing lack of clarity. Detail levels are well below what we’d expect at this price, even when you consider how much speaker you’re getting for the money, and space is so lacking that the sound feels almost trapped within the dimensions of the soundbar.

One silver lining might be that the lack of clarity detracts somewhat from the similar dearth of dynamics and organisation. The whole presentation is generally flat; the rumble of the subwoofer aids crashes and explosions, but there’s little expression in dialogue to lift an overall wooden performance.

The lack of organisational sense is less apparent while watching films and TV, but playing music via both Bluetooth and the Sharp’s physical inputs reveals a soundbar that is quite muddled and not exactly fleet of foot.

If this was a sonic boxing match with the Sonos Beam, which is available for less, the fight would have been stopped in the first round. They aren’t like-for-like, of course – the amount of tech and hardware you get with the HT-SBW800 just pushes it into being a three-star prospect – but it is more proof that, if you’re desperate for Dolby Atmos and a soundbar adept at recreating those extra channels, you won’t get it at this price.

We recently reviewed the Sonos Arc, which proved you can now get a great-sounding Atmos soundbar for less than a grand, so we had our fingers crossed we’d be able to recommend an even cheaper one. But, sadly, the Sharp HT-SBW800 is not it. We can only suggest saving yourself a few pennies here.