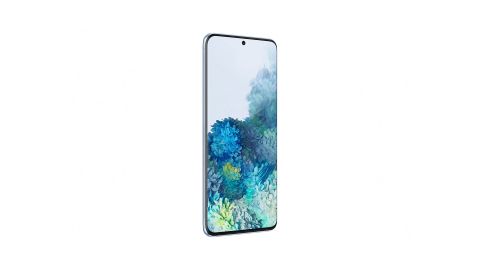 Another year, another flagship Samsung smartphone range. There are three new Galaxy phones, with the Samsung Galaxy S20 the model likely to have most mass appeal. It comes with a higher price tag, of course, but also upgraded specifications, such as 5G connectivity, a 120Hz refresh rate display and significant camera upgrades.

It is joined in the range by the larger S20 Plus and the giant S20 Ultra. While the Galaxy S20 mainly differs in size from the Plus model, the Ultra delivers upgraded RAM and cameras.

For most people, the Galaxy S20 will be the sweet spot in the range, combining a manageable size and all the latest features. But does it continue the five-star lineage for Samsung’s premium S range?

With smartphones becoming more generic in terms of appearance, you’d be hard-pushed to get too excited about the Galaxy S20’s design. That’s not to say it isn’t an impressive piece of engineering, just that we’ve come to expect that of a premium phone – the untrained eye might struggle to pick it out of a 2020 phone line-up.

The Galaxy S20 feels light and has a slim chassis. The edge-to-edge design makes the most of the minimal bezel but it doesn’t curve around the screen in the same ‘Edge screen’ manner as the Note 10. Having found the Edge screen all too easy to activate unintentionally, and struggled to see much benefit from the apparent extra functionality, we think this is a good thing.

The mirror finishes look great – there are Cosmic Grey, Cloud Blue and Cloud Pink options – but are a major fingerprint magnet. Like the iPhone 11 and 11 Pro, the rear camera set-up protrudes from the glass rear panel, but if you use a case then that should negate the bump.

The Samsung Galaxy S20 has a decent-sized 6.1in screen, complete with a 20:9 aspect ratio. It’s a Quad HD+ Dynamic AMOLED Infinity-O Display, which promises to deliver the best smartphone screen experience bar none. Some will be able to navigate their way around using just one hand – it’s taller and narrower than the S10 – but we’d imagine that might be a stretch for most. That said, it is much more manageable than the large Galaxy S20+ (6.7in) and huge S20 Ultra (6.9in).

The Galaxy S20 runs Android 10, the latest version of Google’s operating system, complete with a Samsung One UI overlay. It’s far less intrusive than older versions of Samsung’s software, and you can even choose to not install (or delete) Samsung’s versions of the usual Android apps.

These are the first Samsung S phones to not feature a 3.5mm headphone jack. There’s no adapter provided either, so you’ll need to get your own, use USB-C headphones or go wireless. Samsung obviously hopes you’ll partner the S20 with its new Galaxy Buds Plus. The lack of a standard headphone jack is now becoming standard for the top smartphones, so we all probably need to get used to it.

Elsewhere the S20 has a fingerprint scanner under the screen, rather than below or on the back of the device, and the option of face unlock using the front-facing camera. We found the face unlock feature a little less reliable when it comes to working in low light or off-axis than rivals such as the Pixel 4, but we largely had few issues.

The Galaxy S20 comes with a 4000mAh battery, which is a decent increase on the 3400mAh offered by the S10. Samsung claims quicker wireless charging speeds and the phone comes with its own 25W fast charger, which you might need if you start using the 5G connectivity to stream high-quality video. All told, it should be good for a day’s heavy use, which is about as much as you can expect, or hopefully need.

Samsung likes to go big on cameras with its flagship phones, and the Galaxy S20 is no different. It’s not quite as high-tech as the snapper on its larger sibling, the Galaxy S20 Ultra, but you’re still getting a triple-lens set-up with 12MP ultra-wide, 12MP wide-angle and 64MP telephoto lenses. There’s 10x digital zoom, improved quality in low lighting conditions and 8K video recording, which will come in handy for early adopters of 8K TV.

One of the more practical camera modes introduced for the S20 is Single Take, which uses the camera alongside AI to pick out, and create a portfolio of, all the best moments you capture in one shot – useful when scrolling through options to upload to Instagram. There’s also a 3x optical zoom and a huge 30x digital zoom mode, which is at least a little more realistically useful than the 100x zoom on the S20 Ultra.

Snapping using the standard automatic mode, the results are great. Images are natural but colourful, detailed and sharp. The interface is easy to use, too, striking the right balance between a hefty choice of features for pros and keeping it simple for those who don’t want to get their hands dirty. Simple swipe navigation between front and back cameras is handy, too.

There are a few new features and specs when it comes to audio performance. Music Share allows owners to set their Galaxy S20 as a music hub and source for other components (such as Bluetooth speakers and car stereos). It also opens itself up to additional users, so different people can take turns controlling playback.

Sonically, we have been fans of the S range of phones, which offer a surprising amount of scale, space and detail. The S20 is almost certainly now the best Android phone for sound quality, with impressive insight across the frequency range, and bass details rendered accurately alongside natural, open voices.

Listening through the Sony WH-1000XM3 headphones over Bluetooth, the Galaxy S20 delivers an engaging, entertaining presentation. Smartphone sound has come on plenty in recent years, meaning you really can expect to hear decent dynamics and a sense of power, even streaming Tidal hi-res audio or lossless files over wireless. The Apple iPhone 11 might add a little more refinement, but you’ll be hard-pressed to be disappointed with the S20 audio quality.

The Galaxy S20 has a Full HD+ (2220 x 1080) resolution screen as standard though you can choose to up the resolution to WQHD+ (3040 x 1440) in the settings. You will sacrifice battery life if you do, however, and most people will probably find it unnecessary.

Stick to the standard resolution and you will benefit from a key upgrade on this S20 – the 120Hz refresh-rate display. It means the Galaxy S20 joins what is still a relatively elite club, benefitting from smoother transitions as you navigate the interface and also for gaming. For video, we also benefit from HDR10+, Samsung’s own HDR processing technology.

We opt for natural instead of vivid, and the S20 delivers great picture performance, as we expected based on the S10 and Note 10. We get lovely bright reds and blues, without them being over-saturated. Black level is good, if not faultless, while the level of detail is impressive thanks to the combination of a high resolution on a more normal-sized screen.

The Note 10 Plus will catch your eye, and digs up more detail in dark shadows, but there’s a rich refinement to the S20 and extra sharpness thanks to the smaller screen.

Unless you’ve not set hands on a smartphone for a few years, we’d be lying if we said you’d be falling off your chair with excitement at the Samsung Galaxy S20.

It looks familiar, feels familiar and has a largely predictable list of specifications and features. But we’re in the business of marginal gains, and another year has brought just enough of those to ensure the Galaxy S20 remains a great smartphone for most people, particularly if you’re in the market for a premium phone (and certainly if you want an Android handset).

A superb screen in a manageable size, good smartphone audio, neat new features such as 5G and a 120Hz refresh rate, a smooth, fast interface and a good battery. Sometimes you just need to beat the competition, not blow them away, and the Galaxy S20 has certainly done that for now.