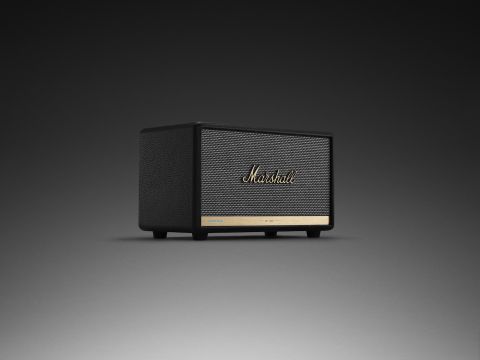 Many will buy the Marshall Acton II Voice for its charming looks, but sonically it's no better than average

“Alexa, turn it up,” reads the box of the Marshall Acton II Voice, but that's a command you're unlikely to be uttering with any kind of frequency.

This isn’t quite an “Alexa, turn it off” scenario, but little about this speaker's performance will have you excitedly pumping up the volume.

The smallest of Marshall’s Alexa-ready wireless speaker range, and at £249 ($299) also the cheapest, the Acton Voice II continues the company’s mirroring of its iconic guitar amplifier aesthetic. The addition of smart compatibility opens the possibility of an entire multi-room system, too.

Build is typically Marshall, robust and tactile, with amp-like dials for controlling volume, bass and treble and a brushed metal button for source selection between wi-fi, Bluetooth and aux sitting on the top.

The company boasts proudly its heritage of “50 years of loud”, so it is little surprise that the Acton II Voice’s power belies its relatively diminutive stature. Two dedicated 15W Class D amplifiers drive its pair of tweeters, while a 30W amp services its large central woofer.

To unleash the speaker’s full potential, you’ll need to download the Marshall Voice app on your smartphone or tablet. It’s this that creates the initial link to Alexa, as well as giving access to the Acton II Voice’s five-band equaliser.

When connected, you will know Alexa is awake by the illumination of the speaker’s five blue LEDs across its front panel, while its far-field voice recognition means you shouldn’t have to scream commands from the other side of the room.

Marshall’s own Alexa integration is as fuss-free as we’ve become used to in recent times. Those far-field mics are worth their inclusion, with our requests being noted even when the Acton II Voice is playing at high volume.

Sitting it beside the Audio Pro Addon C5A, these are effectively the same speaker done two ways, and to this point Marshall keeps up admirably with the Award-winning Scandinavian company.

There are plenty of positives: the Acton II Voice unsurprisingly offers a large sound for its size, and the bass response is rather impressive. We wouldn’t tamper too much with the EQ settings – dialling in any further low end could tip the balance overboard – but out of the box, that woofer, alongside the speaker’s rear-firing reflex port, works hard for its money.

Detail levels aren’t too bad, either, despite not being exceptional. There is decent separation between instruments, elevating the Acton II Voice beyond many cheaper wireless speakers, even when only playing a YouTube video via Bluetooth, though again it does little to trouble the class leaders.

In terms of these general aspects of presentation, our main issues are with the midrange and a hardening of the sound when the Marshall is pushed to higher volumes. The latter is fairly self-explanatory, but we’re quite underwhelmed by the thinness and recessed character of the midrange. Those frequencies are incredibly important, especially for voices, and that really hits home when presented with a feeble performance such as this.

What irks most, though, is the Acton II Voice’s handling of timing, organisation and dynamics. Rhythmically it is disappointingly messy, with even straightforward beats left off kilter, while instruments often appear to be speaking to each other in different languages.

A generally flat sense of dynamics does nothing to help. Marshall wants its speakers played loud, but even so it lacks the intensity to play any of the tracks we really want to hear at volume. As for subtlety, expect even less.

The Acton II Voice isn’t the worst speaker we’ve heard at this price, but £249 ($299) is no small sum, even for Alexa compatibility, and it puts it right in the firing line of Audio Pro.

There’s a lot to like about the build and design of Marshall’s wireless speakers, but don’t buy the Acton II Voice expecting anything more than an average sonic performance.

Read all our Marshall reviews