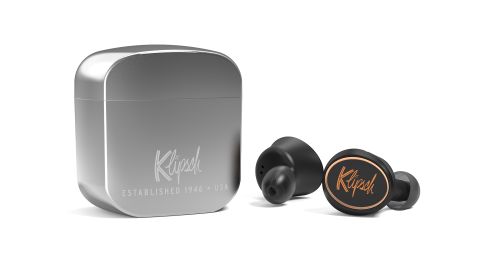 A great-looking pair of true wireless buds – but connection and fit issues, plus the tough competition at this level, means they don’t get the full five stars

True wireless headphones are having quite a year. The lure of attractive wire-free sonic buds is so strong that, despite its historic branding (the firm was born out of an Arkansas tin shed in 1946) Klipsch has released its first set of true wireless buds.

The case weighs nearly 100 grams (about three times heavier than the Apple AirPods’ case), and is covered in brushed metal. It feels like an expensive lighter, the kind you’d get engraved as a gift to Jax from Sons Of Anarchy.

The buds themselves are black, with rose-gold coloured branding across the top of their elliptical housing. This is the only colour available, and we’re not complaining; the T5 True Wireless headphones are exactly the kind of portable accessory Jax would be proud to pull out of his leather jacket.

The neck of the unit is quite long, which is worth noting because while some users will prefer the deeper fit of the buds, others may find it uncomfortable.

There are only three tips supplied and they come with the largest size pre-fitted. The tips ‘snap’ on to the neck of the bud, which is far simpler, although it’s a shame more sizes aren’t included.

However, in our tests, the process of connecting and pairing is not snag-free. The Klipschs initially struggle to find our device, and when they do, they appear to be shy of making a long-term commitment – despite voice prompts claiming they are ready to pair.

Eventually (and after a true wireless reset) we establish a connection, and once connected, the central buttons on each unit perform functions such as pausing a track, connecting to your voice assistant and call-handling – once you get the hang of short or long-pressing the necessary bud to facilitate your request.

Unfortunately, we test the T5 True Wireless without the benefit of Klipsch Connect, an app for iOS and Android, which at the time of writing, is listed as ‘coming soon’ on Klipsch’s website. The app promises EQ settings, battery status, firmware upgrades and more, but in its absence, we’ll have to take Klipsch’s word for it.

In the meantime, there are three small lights on the charging case to give you an indication of the amount of juice left in increments. There is no noise-cancelling tech here, but there are four mics – and in our tests, voice calls were nice and clear.

We cue up Sons Of Anarchy: Music From Sons Of Anarchy – Seasons 1-4 on Apple Music on our iPhone 7, and This Life by Kurtis Stigers & The Forest Rangers is presented with an impressive dollop of detail and separation between the deftly-twanged bass guitar in our left ear and its rhythmic counterpart in our right. Vocals are clean, clear and precise in what is a well-balanced and cohesive mix.

Audra Mae’s vocal in her cover of Bob Dylan’s Forever Young is insightful and tonally emotive, adeptly conveying the soft, lullaby as the writer intended. The banjo strings are warm yet crisp and full – easily recognisable and neatly set apart, while adding to the faultless timing the Klipschs continue to deliver.

Once a secure seal is achieved, the T5 True Wireless in-ears go right down in the bass frequencies to produce a heavyweight performance – but one that’s in no way flabby.

The T5 True Wireless in-ears are capable of digging up slightly more detail than the Cambridge Audio Melomania 1s, which is no mean feat. However, we found that the Cambridge Audios offered more dynamics in songs such as Hey Hey, My My by Battelme, which starts out almost imperceptibly quietly yet finishes with a more lively flourish in the comparison set.

The T5s definitely look the part, especially if you prefer your kit with added rock 'n' roll attitude. They are narrowly pipped to the post by a cheaper product for dynamics though, and we also have issues with the Bluetooth pairing.

A further problem is that, with few tip options available in the box, those who find the T5s uncomfortable will have difficulty altering the fit. But while we can’t award them a full five stars at this price, the Klipsch T5 True Wirelesses remain a good pair of true wireless buds – but competition at this level is tough indeed.