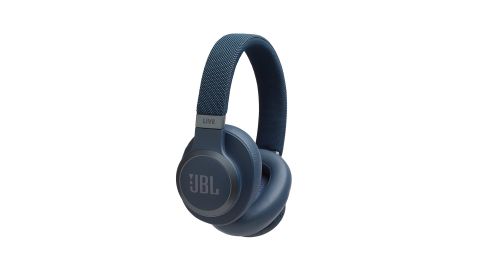 These noise-cancelling headphones are quite fun, right until the moment they become absolutely exhausting

At times it seems like there’s no such thing as ‘middle ground’. Taking things to one extreme or another has become far more common and altogether more popular.

Look at the list of our favourite wireless noise-cancelling headphones, for instance. There are plenty of products in the premium segment, and lots (including a pair from JBL) at the very affordable end, but nothing in between.

But there’s more to earning a recommendation than just showing up at the right price.

We’ve no complaints in terms of the way the JBLs are constructed. The plastics that much of the headphones are made from feel a bit cheap and slightly thin, but nevertheless the Live 650BTNCs feel sturdy enough. The moving parts move with freedom (though not too much) and there are no rogue groans or squeaks from the frame when it’s sitting on the listener’s head.

The tough-feeling fabric on both the inner and outer portions of the headband feels good, too. It should prove hard-wearing, and it’s different enough from the more usual faux leather to make the Live 650BTNCs look vaguely interesting. Fake leather does show up in the covering of the memory-foam earpads, but we wouldn’t have thanked JBL for serving up fabric-covered earpads.

Despite the assertive branding, the JBLs are a tidy design. Unlike a lot of over-ear headphones, there’s not that much of a gap between the sides of the wearer’s head and the headband, so there’s not quite the usual suggestion of ‘Cyberman’ about the way you look when wearing them. And at 249g all in, you won’t be bent under the burden of them, either.

Here, for once, is a pair of wireless noise-cancelling headphones that doesn’t pile every one of its switches and user interface onto the right-hand earcup. The Live 650BTNCs merely put the vast majority of their features over on the right-hand side.

On the right, you’ll find buttons for power on/off, volume up/down, play/pause, active noise-cancelling on/off, Bluetooth pairing and call answer/reject/end. There’s also a socket for using the JBLs with a cable, should the battery run flat. It’s a little 2.5mm input, though, so you’ll need to take good care of the 2.5mm to 3.5mm cable adaptor in the package.

Noise-cancelling is a simple two-stage affair – either ‘on’ or ‘off’. When it’s switched on there’s a definite reduction in external sound, with only the mildest hint of inner-ear pressure to let you know how hard the JBLs are working.

JBL also bundles a USB charging cable in with the Live 650BTNCs. The socket is on the left-hand earcup, which makes a nice change - but it’s a micro-USB, which is a bit retrograde. The battery is 700mAh, which should be good for around 20 hours of listening with noise-cancellation switched on, or 30 hours with it off – and it can go from ‘flat’ to ‘full’ in roughly two hours.

The left earcup is also used to summon your choice of voice assistant – Google Assistant and Amazon Alexa are both catered for. Just hold a hand over the entire earcup for a moment and then your bidding can be done (as long as you speak slowly and distinctly).

The JBLs use Bluetooth 4.2 for wireless connectivity, and once the digital audio information is on board it’s served up by a couple of 40mm full-range drivers. JBL is claiming a frequency response of 20Hz to 20kHz.

It seems ‘excitement’ is what JBL was shooting for when it voiced the Live 650BTNCs. And, to be fair, in some ways it has succeeded. One sure-fire way of creating a sense of excitement is to ramp up the low-frequency response. An overly bassy presentation can easily sound ‘big’, and certainly the Live 650BTNCs are certainly more than big enough where low-end presence is concerned.

Ultimately, though, the JBLs allow their bottom-end emphasis to dominate their overall sonic signature, and it skews the sound of the 650s to an uncomfortable degree.

Streaming a 16-bit/44.1kHz CD-quality file of Boards of Canada’s Alpha And Omega illustrates the point. The JBLs’ overcooked bass reproduction is meant to offer momentum and scale, but the low-end drones rather indistinctly, and while the tune sounds almost oppressively hefty, it gets bogged down as the ponderous bass sounds drag at the tempo.

As far as scale is concerned, it’s mission accomplished. Despite what is a compact and confined soundfield, thanks to their fat and dominant bass the JBLs sound ‘big’ right up until the moment your hearing can’t take the low-end resonance anymore.

At the opposite end of the frequency range, though, the 650s do manage to inject a sense of pace. Treble sounds during Vanish by The Smoke and Mirrors Percussion Ensemble move along at quite a clip, and certainly don’t suffer from the bottom end’s lack of positivity where the start and stop of individual sounds are concerned.

But there’s an unpleasantly glassy quality to the JBLs’ high-end reproduction, and this trebly hardness can quite easily become as wearing as the droning bass.

In between these two ill-resolved extremes, the Live 650BTNCs give just a hint of what might have been. Their midrange reproduction is accomplished and detailed, with plenty of nuance and character included in the vocals during Super Furry Animals’ God! Show Me Magic. This well-judged level of insight makes the midrange the undoubted star of the JBL’s show.

The journey from the bottom of the frequency range to the top is far from smooth, then, and the disjointed nature of the 650s’ frequency response makes for an uncomfortable listen. There’s an oasis of calm and realism in the middle, but on either side the JBLs are verging on the chaotic.

In this instance, it’s not even true to say ‘you get what you pay for’. JBL’s own Tune 600BTNCs are a better-resolved listen than these wearying Live 650BTNCs and are considerably more affordable.