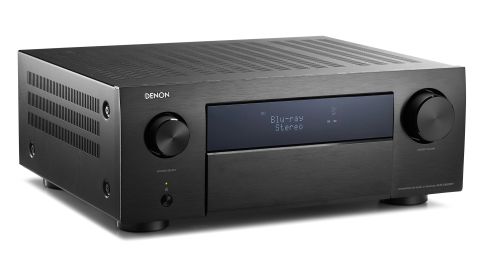 The AVR-X4500H’s talent will surprise few who know Denon’s range of home cinema amplifiers, but that makes it no less impressive

It is often said that those who crave power are the least deserving of it, but Denon doesn’t adhere to that tenet.

Having over the years produced home cinema amplifiers with more kick than a donkey with a drum kit, the multi-Award-winning manufacturer sated its power-hungry customers yet further when it released its 2018 range.

The AVR-X4500H is part of that range, which already includes two Award-winners, and Denon will be hopeful that it continues the fine form – not least because, unlike its more affordable siblings, which have been replaced this year, the X4500H won't be relieved from duty until 2020.

Just like the AVR-X4400H before it, the AVR-X4500H boasts 125W of amplification (into 8ohms with two channels driven) across each of its nine channels, giving you native access to Dolby Atmos and DTS:X speaker configurations up to 7.2.2 or 5.2.4, while the 11.2-channel processing means you can go right up to 7.2.4 if you're prepared to add an extra two-channel amplifier.

Premium 32-bit AKM AK4458VN digital-to-analogue converters serve each channel, while the AVR-X4500H is also capable of decoding lossless files including ALAC, FLAC and WAV up to 24-bit/192kHz, as well as being compatible with up to 5.6MHz DSD files.

The front of the unit is typically Denon: a pair of large dials, for source selection and volume, bookend the amp’s information screen and flap, which conceals a range of control buttons, a singular HDMI and USB connections, and a headphone output. But so is the rear: a glance at its dense population of connections hint at what’s going on inside to justify that price tag.

Among the impressive specs are seven additional HDMI inputs and three out, five RCA terminals and a phono for connecting a turntable, and a pair each of optical and coaxial digital inputs.

But Denon is not selling the AVR-X4500H solely to power your home cinema set-up; it intends it to be an entertainment hub, at the heart of all film and music playback in the house. This means the inclusion of a second zone, whereby you can assign certain connections to feed a two-channel system elsewhere in the house.

But it is also about being part of the HEOS multi-room ecosystem. That means you can link your home cinema and potential second-zone hi-fi system to be controlled alongside any other HEOS speakers you might have around the house – kind of a more audio-serious version of Sonos.

The recent addition of Apple AirPlay 2 to Denon’s AV receivers also facilitates its control via Siri, while the addition of an Amazon Echo speaker or Google Home component would mean those companies’ voice assistants are also compatible with the AVR-X4500H.

Their superior sound quality is our main reason for holding Denon’s home cinema amplifiers in such sustained high regard, but the ease of their set-up is another major selling point – especially for those new to the concept, perhaps upgrading from their TV speakers or a soundbar for the first time.

It is simply a case of plugging the included microphone into the front of the unit and running the Audyssey software built in to the amp. It will guide you through a range of positions to place the mic, and then do the rest for you via a series of test tones and some clever processing. You may wish to experiment with a little fine-tuning afterwards, but rarely do we find ourselves straying too far from the levels Audyssey has discerned.

Not only does that make life easy, it allows you to enjoy Denon’s Award-winning  signature sound sooner. Though it was the amps either side of the AVR-X4500H in this range we celebrated at the end of last year – namely the AVR-X3500H and AVC-X6500H – again Denon can claim a class leader at this midway price point.

Unashamedly pugilistic in nature, the AVR-X4500H devours those scenes in which it is able to flex its muscles. But it boxes clever, with sharp jabs working its way to a knockout blow, rather than slugging away and tiring itself out.

It is undoubtedly the first thing you notice about the amp’s sound, but it's unfair to say that is its defining characteristic. It's more that every other sonic aspect is so natural that it is easy to be impressed by how much power you’re getting for the money.

There is a substantial helping of bottom end, designed to put you in your seat and hold you there, but it never dominates what is a clean and even balance with little to provoke any fragilities elsewhere in your system.

With audio, though, most imperative is always that combination of timing and dynamics that draws out the expression in a film or a piece of music – and in this regard, Denon has long excelled with its home cinema amps. It is responsible for the emotion in actors’ voices, the snap of an action scene and the apt scoring of a soundtrack.

It is also why, while it doesn’t reach the peaks of a class-leading stereo amplifier at even a third of the price, we could back anyone using the AVR-X4500H’s second zone option to power their hi-fi, or simply using it to play music through a surround package.

Slack timing in particular is more readily highlighted when a component grapples with rhythms over scenes in a film, and is why many otherwise decent receivers aren’t so suitable for that dual purpose, but Denon has nailed it.

Given its family, the AVR-X4500H is just as good as we all thought it was going to be, which is surely reason enough to spend some time celebrating it. If you have £1199 to spend on a nine-channel AV receiver, this Denon should be underlined right at the top of your list.

Read all our Denon reviews