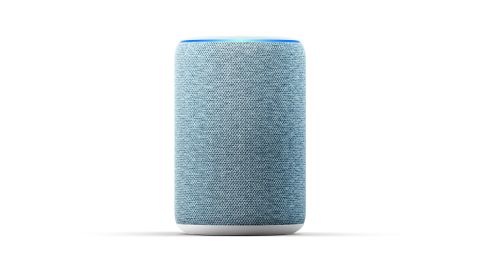 The new Echo has loads of features and sounds quite good, but the Echo Plus had given us hopes of even more

We don't wish to come across as ungrateful, but even though this third generation of the Amazon Echo is far superior to its predecessors, we still leave our testing facilities somewhat disappointed.

It’s a four-star speaker, and usually that would leave a relatively broad smile across our faces, but Amazon had promised a lot more through its product literature and, as a result, we had expected better things.

Placed next to a similarly fabric finished Echo Plus – Amazon has added an option of Twilight Blue to the existing Charcoal, Heather Grey and Sandstone – there is little way of distinguishing between the two.

As Amazon says, the two are identical in terms of design, dimension and driver configuration. Without listening to both, the only discernible difference is the Plus’s built-in Zigbee smart home hub and temperature sensor.

No information is forthcoming on aspects such as amplification or DAC technologies and, given the £50/$50 price difference at the time of writing, we wouldn’t expect the exact same level of sonic aptitude as the Plus. However, our confidence in Amazon’s ability to pack smart features into some superb speakers meant that we hoped the Echo would still be among the top performers in its class.

Nevertheless, for £90/$100, this is still a great smart speaker. The drivers behind its promised 360-degree sound are an 8cm neodymium woofer and 20mm tweeter. Bluetooth and a 3.5mm aux in and output are on board, but to unlock the Echo’s full potential you need to connect it to your home wi-fi network.

This is achieved via the Amazon Alexa app, which is also where you’ll be able to tweak the EQ, pair two speakers to play in stereo and create multi-room groups of products. The latter two functions you can only unlock if you’re streaming your music over wi-fi.

Being online also means, as well as controlling all aspects of music playback, Alexa can retrieve news and weather reports, manage your calendar and regulate other smart products around your home. Just ask for the track, album, artist or genre of music you want to hear, and Alexa can pull it from Amazon Music, Apple Music, Spotify, Deezer or TuneIn.

Regarding any privacy concerns – though that horse has probably not just bolted by now, but arrived at the glue factory – you can turn the microphone off by pressing one of the four buttons on the Echo’s crown. The others control volume and pairing.

Leave it on, and you can use your Echo to make and receive calls from your mobile and, if you have another compatible device in another room, use it as a two-way intercom. You can also hear and delete any voice recordings online, via the Alexa app, or by saying “Alexa, delete everything I said today”. If only that worked in everyday life too.

So it’s about as smart as these speakers come, bar the added smart home hub and temperature sensor of the Echo Plus.

Put it next to the previous generation Echo and the new model's upturn in terms of detail and clarity is quite striking. There’s certainly more in the way of insight, and the sound is generally far less boxed in. Suddenly it sounds like Amazon has taken as much time over the Echo’s sonic output as it has the smart features.

The balance is decent, too. The bass is sometimes a bit soft and ill-defined, but it certainly isn’t lacking in terms of scale or reach for a speaker this size. It does a decent job of bulking up the midrange, too, which is where the Echo gets through most of its work, and while the treble isn’t exactly open, it is smooth and doesn’t sound overly squashed.

Its weaknesses present themselves in terms of organisation, timing and dynamics. These were almost moot points with the previous iteration, where clarity and detail were lacking to the extent levels of expression were comparatively minor worries, but this third generation is still not hugely sophisticated.

It is listenable, but it doesn’t really grab our attention or describe the narrative of a piece well. And that is compounded by a lack of space that fills up quickly with arrangements of more than a few instruments.

Compared to the latest Echo Plus, the Echo is a frustrating listen. The soundstage opens up with the Plus, which offers a far airier presentation, and rhythms are dealt with greater pace and urgency. Dynamic range is also far superior, asking us to listen more than simply cohabit.

Again, the price difference, albeit offset by the Echo Plus’s added technology, makes this an unfair fight, but given the similarity in base materials, we hoped there would be much less discrepancy between the two’s sonic talents.

In short, if you want a speaker with this feature set and Amazon Alexa built-in, the third-generation Echo is still a decent option for budgets below three figures. But if sound quality is your main concern, then you’re better off either forgoing the voice control or waiting and saving up for the Echo Plus.

We don’t want to appear overly critical of Amazon, but the Echo is quite good and nothing more. Prior evidence suggests it could have done much better.