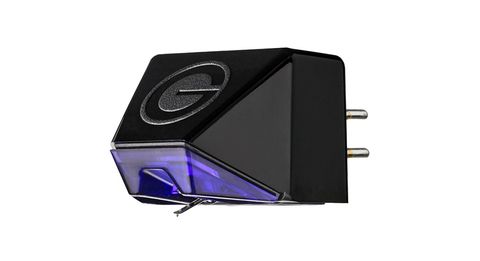 Television manufacturers churn out a multitude of new product ranges every year. Speakers and amplifiers tend to survive for three, four, maybe five years before being updated.

But cartridges have a habit of living extraordinarily long lives, quite often lasting decades with only the smallest of tweaks. So it’s a big event when a major manufacturer like Goldring introduces a completely new family of products, as it has with the E Series.

The E Series is made up of three models – all moving magnet designs – starting from £60 for the E1 right through to the £100 E3 on test here. The differences between the three come down to the choice of cantilever and stylus tip.

The E3 has an aluminium cantilever with an elliptical tip (0.3 x 0.7mil) while the base model swaps the aluminium for carbon reinforced ABS (posh plastic, fundamentally) and the tip for a 0.6mil spherical design.

The cartridge body design is shared through the range, with the different models differentiated by the colour of the bottom edge. The E3 is a rather nice shade of violet.

The cartridge’s dense plastic body is nicely shaped. It’s obvious plenty of thought has gone into trying to make the E3 easy to fit.

There are captive nuts to make attaching the mounting bolts simple, and a straight edge along the front helping to make alignment quick and easy.

Physically, the E3 is entirely conventional. It’s not particularly heavy at 6.9g and tracks securely at a typical 2.0g. We can’t think of a price-appropriate deck that won’t suit this moving magnet cartridge.

There shouldn’t be any issues as far as electrical matching to the phono stage goes either, thanks to the Goldring’s standard 47kOhm and 100-200pF load requirements.

It doesn’t take us long to fit and align the E3 onto our resident Rega Planar 2.

We have it playing in the background for a few days before we start serious listening and, once bedded in, this Goldring is an impressively rounded performer. It sounds clean and precise, delivering the bombastic opening to Beethoven’s Fifth Symphony with all the clarity and power it demands.

While majoring on control and composure, the E3 still has enough in the way of dynamic punch and scale to satisfy with music such as this. It’s an organised sound, one that can keep track of myriad instrumental strands without losing its way.

Nirvana’s Nevermind is next onto the Rega’s platter and the Goldring takes it all in its stride.

There’s a decent serving of attack and a surefooted way with rhythms. It’s topped-off by a high level of refinement, which keeps even aggressive recordings listenable.

There isn’t quite the forcefulness of more expensive alternatives – the E3 prioritises control – but it’s still a cohesive and musical presentation.

Through the Goldring, vocals are expressive, drums hit hard and there’s a good dose of energy. The sound it delivers is clear, informative and still fun. We can’t ask much more than that at this level.

If you’ve got a good mid-priced deck that’s in need of an upgrade to the cartridge, we can’t think of an alternative that’s so capable.

Simply, the E3 is a great buy.