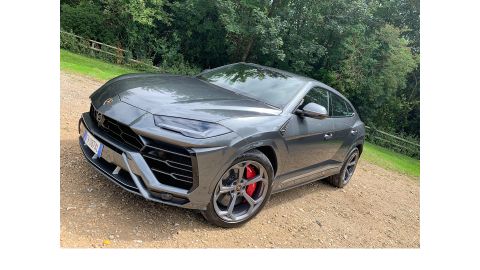 This big and powerful-sounding system suits the Urus to a tee and produces some brilliant stereo imaging.

Bang & Olufsen has teamed up with many different car manufacturers over the years, providing systems for a range of models across various price points. Aston Martin, Audi, Mercedes-Benz and Ford are just four brands to have benefitted from a partnership but, as the saying goes, there’s a first time for everything.

And this is where the Urus comes in. This super SUV marks the first time that Bang & Olufsen has featured in a Lamborghini.

So, it’s no surprise the Danish luxury brand has come out all guns blazing and fitted the Lamborghini Urus with its premium Advanced 3D sound system.

By premium, we mean ticking the options box will add an extra £4375 to the price of your Lamborghini. For the money, you get 21 speakers, 21 channels and 1700W of Class-D amplification.

The fact it’s a premium system means Bang & Olufsen's trademark Acoustic Lens tweeters make a welcome appearance. When not in use, these 19mm lenses are hidden away, one in each corner of the dashboard, with only a small B&O logo on top hinting that something lurks beneath.

Fire up the Urus using the trademark jet-fighter-style engine start button and both lenses rise in unison out of the dashboard, adding an extra dose of theatre to this already show-stopping car. The Acoustic Lenses aren’t just for show, though. They’re designed to allow wide, 180-degree dispersion of high frequencies, and they certainly deliver on that front.

Similarly, in the rear, there’s a 10cm midrange driver and 16.8cm woofer in each of the doors, partnered with a 25mm tweeter in each B-pillar.

The speakers in the doors are hidden behind precisely crafted aluminium grilles. Each one boasts a smooth matt finish and distinctive Y-shaped holes, in keeping with the design cues throughout the Lamborghini’s cabin.

The surround channels are two pairs of 10cm midrange drivers and 25mm tweeters built into the headlining in the rear of the car. And, finishing off the set-up is a 26cm subwoofer hidden in the boot/trunk.

Lamborghini is part of the Volkswagen AG (VAG) family, with the relationship having its perks in terms of infotainment and what the Urus can ‘borrow’ from other brands under the VAG umbrella. In the Urus, for example, you’ll find a virtually identical touchscreen infotainment set-up to that found in the Audi A8. The top screen handles sat-nav and multimedia duties, while the lower display is tasked mainly with the air conditioning.

It’s a good-looking set-up. Both screens are punchy, clear and easy to read. The resolution on offer means icons are crisply and precisely drawn. Album artwork appears clear and pristine too with solid, bold colours and excellent contrast.

Instead of physical buttons, the digital ones on the touchscreen give you haptic feedback from every press – you feel a click with every command and you can actually alter how powerful it is through the menus.

The screens are responsive to touch, scrolling is relatively smooth and the system feels like it’s working with you as opposed to against you. Some systems we’ve experienced don’t respond quite as predictably.

The only slight negative is those screens are fingerprint magnets, meaning the slightest of touches stands out like a sore thumb, especially when the system is powered down.

Bring up the system’s sound menu and you’ll see a number of different settings. You can dabble with treble, bass, subwoofer, balance and fade the music from front to back. All these are par for the course, but the B&O system also has the ability to shift focus (all, front, rear, movie), surround level and the 3D sound effect, which can be set to high, medium, low or off.

We settle on 'all' for the focus – although 'front' allows more information through to the front speakers, we prefer the general balance and feel of 'all'. We keep 3D sound on low or medium – the system sounds more expansive on the higher setting, but you end up sacrificing cohesion and precision in the soundstage.

It’s the same for the system’s speed-dependent volume control, which just ends up sounding noisier and messier the higher you set it. If you prefer it turned on, we'd restrict it to a low setting.

The first thing to note is that there’s plenty of power on tap. Lows sound purposeful and precise. Leading edges are nicely defined and the system can delve deep too. The bassline to Drake’s Started From The Bottom is searching and probing. It might not be the most precise but, like the car's 4.0L V8 engine, this system isn’t afraid of making its presence felt.

The B&O set-up uses a special Symphoria 3D surround sound algorithm designed by the Fraunhofer Institute to give passengers the impression they’re sitting in 'an acoustically enlarged' cabin.

This translates into a wide and open expanse of sound and a thoroughly convincing and cohesive stereo image. Vocals and instruments are all neatly organised, with each various element sounding natural, refined and detailed. There’s a degree of sophistication to the sound, especially where mids and highs are concerned, that allows you to sit back and let the music do the talking.

Play The Cure’s A Forest, and Robert Smith’s vocal is forthcoming and expressive. The swagger of the electric and bass guitars helps set a course for the track with a simple kick drum bringing up the rear.

The Bang & Olufsen system skillfully separates everything out but still manages to integrate the different speakers extremely well, disguising their positioning.

There’s no trace of hardness or brightness, although the system doesn’t smooth over the cracks of poor recordings. It’s refined, without sounding completely rolled off. But as we play more tracks, the system begins to sound dynamically restricted.

We play Royal Bloods’ Figure It Out and the leading edges of those powerful drum thwacks and guitar notes don’t display enough snap or attack. Consequently, the song doesn’t sound as engaging or attacking as it should. Other systems we’ve heard have the edge where timing is concerned too. The B&O set-up lacks a little fluidity to fully communicate with the listener.

This is an extremely capable system, with plenty of power and a good dose of refinement. You won’t hear many systems where the imaging is as precise and cohesive as it is here.

It’s not the last word in dynamics and timing, but it does treat you to a sound that fits the big brutish character of the Urus extremely well.

See all our Bang & Olufsen reviews