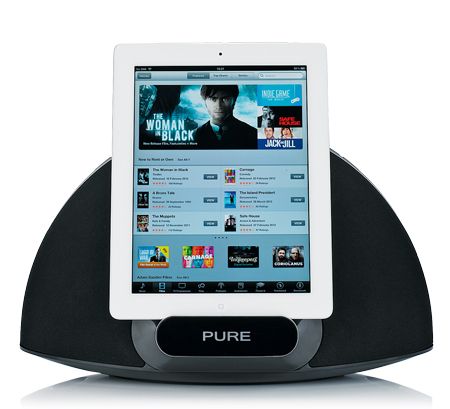 Pure’s first radio-less speaker dock fares well, but it can be bettered

A Pure Contour system without a built-in radio is like a Wimbledon fortnight without Sir Cliff – unthinkable. But that’s exactly what you get with the Pure Contour 200i Air.

A Pure Contour system without a built-in radio is like a Wimbledon fortnight without Sir Cliff – unthinkable. But that’s exactly what you get with the 200i Air.

Pure has stripped out the DAB and FM tuners you find in its Contour and Contour 100Di. Instead, the company is nudging consumers down the Internet radio route via the company’s Pure Lounge music streaming service for iOS and Android devices.

Once it’s installed, you can stream popular songs, podcasts and live radio feeds from around the world through your smartphone. Of course, this is in addition to playing music straight off your devices’s hard drive.

Of course, as the model name suggests, the 200i Air does feature AirPlay functionality: in fact, it’s the first ever Pure product to be AirPlay enabled. Connecting the unit to your network is simply a matter of docking your iDevice and hitting the wi-fi setup button on the rear of the Pure.

Press ‘accept’ on the prompt screen and Contour hops on your network straight away. The Contour can operate wirelessly, or you can hardwire via the Ethernet connection on the back of the unit.

If you don’t have an iOS device but still want to use iTunes, you can turn the Contour into a wireless access point and use the designated web page and setup manager to get it paired with your network.

The 200i Air has been designed to work with iPods, iPhones and iPads. The speakers have been positioned so they’re not in the way should you want to play whilst an iPad is docked.

On the rear you’ll find a 3.5mm aux input and digital coaxial output should you want to hook the radio up to a stereo amp and listen through your own speakers. They accompanying remote is on the small-side, but it’s intuitive and responsive enough, allowing you to switch inputs, alter volume, etc.

There’s an LED on the front of the unit, hidden beneath the fabric cover, which glows a different colour depending on what you’re doing e.g. white when using AirPlay, blue for when you’re using a docked device and pink when using the auxiliary input.

Software updates can be done automatically while the unit’s in standby or sleep mode, so it doesn’t interrupt your listening.

Factor in the cost of implementing AirPlay and sound quality is fine for the money. The Pure does sound coarse, but the general level of detail is good and the speaker system sounds lively and keeps a decent tempo.

Vocals and dialogue sound clear enough and although not the weightiest of sounds, lows avoid coming across as malnourished. The switch from a docked iDevice to AirPlay does result in a slight drop in sound quality, but it’s still listenable.

But every time we tried to stream a song or album, it crashed and closed the app. This happened a few times, even after uninstalling and reinstalling the app, so there’s obviously some work to be done in this department.

What we have here is a relatively affordable first step onto the AirPlay ladder. Sound quality isn’t perfect, and Pure’s own app could do with a few refinements, but the 200i Air is still worth investigating.