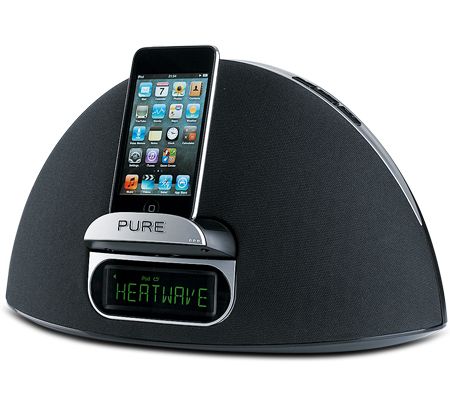 A versatile, great-looking and great-sounding dock for a fine price

It's tough to strike a balance between price, feature count and ease of use, but Pure has comprehensively nailed it with its Contour 100Di.

All the major specification bases are covered: there's a dock for your Apple device, an FM radio and a DAB tuner, while build quality is far above what we'd expect at this price level too.

Only the slightly plasticky membrane-covered remote control lets the side down a tad. Special mention has to go to the concealed revolving 30-pin iPod dock, which reveals itself smoothly when pressed. "Nice action," a few of the team enthused.

Radio prowess with DAB and FM

Getting down to business, we started off the test with radio. Many rival products at this price can be a touch noisy with FM, but the Contour tunes itself quickly and keeps a firm hold on the signal, with little crackling or hissing to speak of.

The DAB tuner, likewise, is painless to set up: just scroll through the available stations on the one-line display. Sound quality depends on the source, of course, but we had no complaints, with decent streams.

The Contour's main draw, of course, is its iPod integration. Dock your device and you can navigate it with the dock's remote control – track information is shown on the easy-to-read display.

We were as impressed with the sound as we were with the 100Di's build quality, too. It won't rattle your windows, of course, but its two 7.5cm drivers and rear-firing bass port deliver a surprisingly weighty performance.

Voices are clearly defined, with a pleasing amount of detail ringing through, while the top of the frequency range stays composed until the volume reaches antisocial levels.

And if you're wondering where the internet radio functionality is, don't worry – it's merely a few clicks away in Apple's App Store, courtesy of the free Pure Lounge app.

We really like the Contour 100Di. It looks great, sounds great and offers truly impressive value for money.